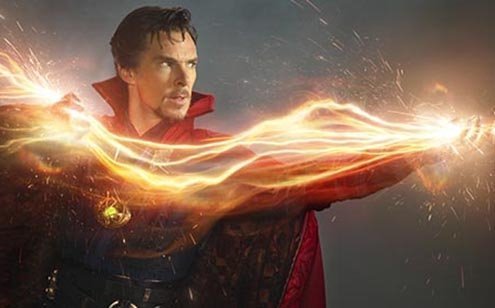 or most of the film he’s the wise, measured sidekick of our hero, Doctor Stephen Strange (Benedict Cumberbatch). But in the film’s last scene — after the credits, so stay in your seats — Mordo (Chiwetel Ejiofor, “Twelve Years a Slave”), convinced that the “natural order” has been violated, proclaims, “too many sorcerers.”

Moviegoers may find themselves taking Mordo’s side. While the sorcerers in “Doctor Strange” are actually quite few, sorcery of one sort or another dominates the second half of the film, leading to an aesthetic numbness. Interminable scenes of spatial disruption — New York City buildings bending, turning on their sides, Escher on steroids if you will —and all to no apparent purpose (except to evoke the collapse of the World Trade Center Twin Towers).

The good guys fall off the sides of one building after another, but, as in all comics, no one gets hurt. When a section of Hong Kong is destroyed and people do seem to die, Doctor Strange summons his newfound skills to turn back the clock and restore the city. Ordinary folks go back to eating their noodles. He then uses that same talent to generate an endless time loop that yields a compromise with the singular force of evil. Yes, a compromise. The time loop is in vogue this film season: see “Miss Peregrine’s Home for Peculiar Children.”

Suspension of disbelief is required of viewers who want to enjoy this film. It’s also essential to the arc of the film. In line with the transformation of Doctor Strange, who is told, “you must forget everything you think you know.”

When the film opens, Strange is a brilliant, arrogant, rigid, rationalistic, narcissistic, egoistic neurosurgeon. He’s superb at his profession but otherwise a jerk — reminiscent of Harrison Ford’s lawyer in “Regarding Henry” (1991) or Hugh Laurie as TV physician Gregory House. Cumberbatch is perfect for this role, having displayed an aloof intelligence as Holmes in the British TV series “Sherlock” (2010-2017) and mathematical genius and vast self-confidence in “The Imitation Game” (2014).

An accident changes everything. The doctor awakens to his own stigmata (not the last suggestion of a Christ figure in the film). Seeking a cure, he reluctantly journeys to the proverbial “East,” where The Ancient One (an androgynous, Yoda-like Tilda Swinton), a monkish librarian (Benedict Wong), and Mordo introduce their skeptical if needful pupil to the mystic and martial arts. Strange’s learning curve is fun to watch — and, like the rest of film, punctuated by humor.

The learning process has its serious side. Our hero is the new, sensitive male, arguably an imagined companion to the feminist of the 1970s: sensitive, humble, tender but non-sexual, flexible, ready to serve humanity rather than himself, able to apologize to a predictably confused Christine Palmer (Rachel McAdams), a stand-in for the viewer but otherwise not much more than a pretty face.

One might conclude the story line is over the top and lacking in subtlety, and both are right.

For the rest of the film our sensitive male, who as a surgeon once saved lives, becomes the real man conjured by 1980s heavy metal: a warrior/killer, armed with the devices of sorcery — an oculus, a ring, a magic cloak in the role of Dorothy’s ruby slippers — while confronting a band of mostly faceless bad guys who see time as the enemy and have a simple goal: immortality in this life (the Christian promise of eternal life after death? Not good enough).

So yes, “Doctor Strange” lacks the mind-bending — rather than building-bending — pleasures of Christopher Nolan’s 2010 “Inception” (recall he also directed and wrote the Batman films). Scott Derrickson’s film, unlike Nolan’s, is predictable and saccharine and overloaded with special effects and high-tech non-fighting fighting of the kind introduced by “Star Wars.” It is, after all, a film based on Marvel Comics, and comes with the outsized action sequences and emotional limitations of that medium.

Even so, there are some fine performances: Swinton’s reserved and authoritative role as The Ancient One; Dane Mads Mikkelsen’s Eastern European-like malevolence as Kaecilius; Ejiofor’s cautious and moralistic Mordo. And, of course, Cumberbatch — a special actor equally at home as Hamlet or superhero, as a man accepting a world he was sure didn’t exist. The magic cloak fits, and, as the end of the film makes clear, we are sure to see Cumberbatch — who has nailed this Marvel superhero — wearing it in sequels.