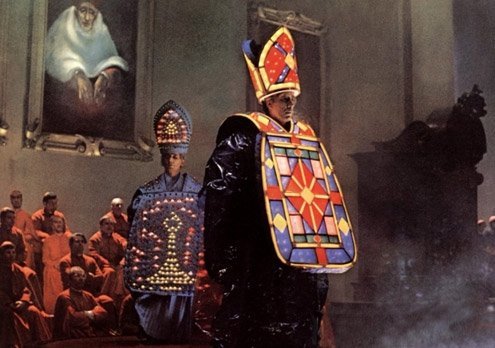 ederico Fellini’s in prima persona ode to Rome — known for decades simply as “Fellini’s Roma” — is a prowling hodgepodge of haunting anecdotes that depend on the filmmaker’s ferocious bias for both style and substance. Here are scenes from a city that, in 1970, and some might say even now, possesses many different gravitational forces, few operating in a coordinated manner. Fellini gets to these bizarre disparities through vignettes. Consider the documentary-style probing of the then under-construction Rome subway line, which seems all at once like trip through a Dante bolgia. Or scenes from an otherworldly cocktail party that assembles cardinals and members of the black aristocracy and inserts like so many colorful vegetables into a hedonistic porridge that culminates in a fashion show. Then there’s Gore Vidal, a Rome part-timer, toasting his way through a celebratory cameo (Fellini was oddly provincial in his deference to outside bigwigs).

All of this plays out as a Gothic exploration of a dubiously Christian town. The star is the city and the city is a glamour queen with a dirty mouth.

What’s most striking is the city’s charcoal energy, and Fellini’s willingness to run along side it like a yapping puppy. The whole has the tone of failed Futurism fermented for the second half of the century. Only Fellini would manage a backhanded homage to the raccordo anulare, Rome’s sullen ring road, the rainy, asphalt tone poem that ends the film.

Beneath this surreal bustle is a sense of a self-involved capital in love with itself and going nowhere fast. Which is the way Fellini liked it. Between the 1950s and 1970s he was Rome’s Earth, and Ptolemy the reigning astronomer.

One thing Fellini never was, at least not purely, was malicious. People went sour, lost their way, but stopped short of the cruel.

Not so in Argentine-French director Gaspar Noé’s 2002 “Irréversible,” which is about how malice, once ignited, is fire to silk. It’s heinous going. Alex (Monica Bellucci) is raped, beaten and dead. You know this early. Lover Marcus (Vincent Cassell) and friend Pierre (Albert Dupontel), also once Alex’s lover, are introduced while hell-bent on finding the pimp behind the killing. They tear through a nightclub (hand-held-camera is the rule) and brutalize a man – the wrong man.

Noé’s movie adopts a clinical back-to-front structure to deflect knee-jerk value judgments. He tracks backs to the dingy passageway where pimp Le Tenia (Jo Prestia) assaulted Alex in a scene more primeval than pornographic. Noé is so tuned in to the tactics of humiliation that he, not the movie, seems caught in the act. Le Tenia goads Alex, who parries back. For a time she seems to have dodged the worst. But the power shifts again, and what follows is unbearable.

Called upon to show rape as a crime about power and control, not sex, Noé does the unprecedented: he proves it visually. As the story arcs back further — Alex’s tender, provocative, sexy life with Vincent — the circle is squared. Noé’s film is brilliant, mesmerizing, and cruel beyond words. Therein the problem: the awful terminus known from the start, few want to board this bus. And who can blame them? Yet few films are as inimical to pornography as this one.

On a lighter note, flip the pages back a few years to the Coen Brothers’ 2008 “Burn After Reading,” if for no other reason than to rid your mind of Wikileaks, Julien Assange, Edward Snowden and Glenn Grossman. It’s comic release from so much adversarial pressure, a slight but cheerfully twisted comedy about the penalties of bad intelligence and gross vanity.

Shake and stir, add greed, divorce and dissension and you get idiocy and confusion, in that order. The men are weak, the women are driven, everyone’s sleeping with everyone else, and the CIA doesn’t have a clue. The movie’s zany central characters — particularly Malkovich, Pitt and McDormand — are hilarious (Pitt and “What the fuck?!” Malkovich have a field day). The rest is a nasty little screwball satire about paranoid Washingtonians who are paid to know everything, tap into everyone, but are professionally clueless.