Stranded (now and then) 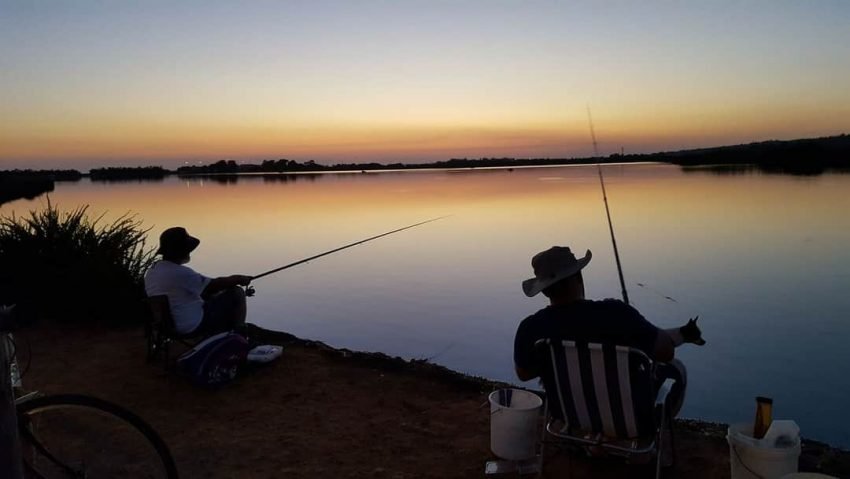 A lagoon in Ugento becomes a site to fish for distant memories. (Photo: Marcello Cazzato)
S

he was there, on the other side of the huge round pond, a sort of lagoon separated from the sea by a wide strip of golden sand dunes.

It was, in fact, an artificial basin that was part of a complex of waterways and small man-made lakes created during the first half of the 20th century to help drain the stagnant waters of the broad marshlands south of Ugento, in the lower part of Salento in Italy’s deep south. The drainage, funneled, was intended to spill into the Ionian Sea.

Not surprisingly, these wetlands were notorious as breeding grounds for malaria, which wrought havoc throughout the country, including in Rome, well into the 1930s. Now, nearly a century later with malaria all but eradicated by modern medicine, it is a wildlife sanctuary.

I began with “she”, and the “she” of this story was a big girl with a whitish dog, a Labrador probably. As I watched from the other side, the dog repeatedly splashed and swam in the water in front of her. Behind her was a small car, parked strangely askew and partly hidden by the lush vegetation.

The girl waved her arms, shouting something that the distance between us drowned out. All the while, the wind whistled through the reeds and the pine trees, making a collection of sounds of its own. All I could hear was the fragment … ata. I hesitated. She started to jump, still waving her arms and shouting, … uto … ata … abbia.

It was the car’s tilt that finally woke me up. She was shouting auto – bloccata – sabbia: her car was stuck in the sand. I gestured for her to wait and started to walk in her direction, along the roundish lips of the basin.

I must now turn back the clock.

It was not far from that same spot where the girl was now standing that it had happened. Almost thirty years had passed, and the 20th-century had become the 21st.

The older story also concerns a car — my car. I had parked my Peugeot 309 a few dozen meters from the lagoon. From tthe trunk, I had dragged out all my photography paraphernalia. Once upon a time, I would go to the wetlands to take pictures of birds. I had a tripod and a rucksack containing my Miranda M3 camera, a telephoto lens, film rolls, a bird guide, a notebook, pens and pencils, and a bottle of water. I wore a green parka and an Australian pastoral hat, a gift from my Sydney archaeologist friends.

The girl waved her arms, shouting something that the distance between us drowned out. All the while, the wind whistled through the reeds and the pine trees.

I locked the car and made for the lagoon. After a few steps, though, I stopped and went back to fetch a flashlight from the glove compartment. I shut the car door and marched briskly to my favorite observation spot. My mood was good.
Snipes, sandpipers and plovers waded along the shore. A bit farther on, mallards placidly paddled on the glassy water. A splendid white egret stood perched on one leg near the reed thicket, staring intently at something in the water.

As I watched and shot, I paused for a moment out of nervous habit to check that I still had my car keys.

They were not where they should have been, and nowhere to be found in my other pockets.

I rummaged through the content of the rucksack. Nothing.

Collecting my gear, I headed back to the car. Maybe I’d left them there when I’d gone back for the flashlight.

And I had. They were there, resting on the passenger side seat.

… If only I hadn’t studiously locked the car.

My 1988 Peugeot had no remote central locking system, a device still largely unknown in Italy. The mobile phone was not yet standard human equipment.

Standing in the middle of nowhere, dressed like a scarecrow and laden with cumbersome gear, I began to panic. Dark clouds, dense with rain, began piling up in the sky above me.

I set off for the two-mile-walk back to the main road as a drizzle began. The nearest town, Ugento, was five miles away.

Maybe I’d be lucky enough to hitch a ride.

I had been walking for a few minutes on the main coastal road when I heard the roar of an engine behind me. It was a green Fiat 127, and I frantically gestured to the driver. The elderly gentleman with thick glasses behind the wheel brought the car to a stop, rolling his window down and peering at me from his window. He was anything but happy to see me.

“Are you Indiana Jones?” he said.

I asked if he’d be nice enough to drive me to the nearest phone.

I phoned my brother Franco in Alezio, fifteen miles north, asking him to pick me up. We could get my spare key and head for the lagoon to retrieve my car.

Did I mention a spare key? Well, it was nowhere to be found.

I eventually decided enough was enough. We would drive to the lagoon with tools, including a hammer.

The rain had stopped by the time we arrived, but it was dark. The tools got us nowhere. The car was a vault. It pained me, but I grabbed the hammer and made enough of an opening in the passenger side window to get in.

“Now, we only need a police unit to happen around…” I joked.

And that’s when a blue flashing light became visible between the reeds.

The elderly gentleman with thick glasses behind the wheel brought the car to a stop, rolling his window down and peering at me from his window. He was anything but happy to see me.

A Carabinieri Alfa Romeo materialized, the floodlight mounted atop their car, already blinding us. Two officers got out.

“What’s going on in here?” asked the brigadier.

“That’s my car,” I told him, embarrassed.

The two got closer. They wanted to know why I needed a hammer to get into my own car, since most people generally use keys.

Well, I’d locked the keys inside.

They checked all our personal documentation, as well as the car’s, scribbling all of it down into what would be a report.

And then they bid us goodnight and left.

“And to think they’re never around when you need them,” quipped my brother.

As for the damsel in distress, she turned out to be a very pleasant woman in her forties. The dog, a friendly female Lab, came to sniff my hand and shoes, no doubt picking up the scent of my own dogs. I stroked her head.

The car, a small Opel Corsa, mired deep in soft sand. The woman’s mobile phone was dead. Could she please use my phone to call for a tow?

But I’m an old boy scout, at least in spirit. I had five meters of rope in the trunk —or boot if you’re Ebglisih — of my Peugeot. I could pull her car out of the sand, but I’d have to get to my car in the nearby lot first (a half-hour walk).

I told her what I had in mind to which she replied, “You will come back … won’t you?”

I promised I would, and I did. My diesel Peugeot 407 (yes, I’m a Peugeot man) took over from there, and her car was soon back on the road.

“You’re a true gentleman,” the woman told me, brimming with thanks.

“I suppose that’s my problem,” I replied, and we both laughed.

The woman opened the back door and the dog jumped on the back seat. Then she got in, turned the ignition key, went into reverse and — sand spewing everywhere — drove off, a smile on her face.

This time around, not a hammer in sight. And no Carabinieri either.