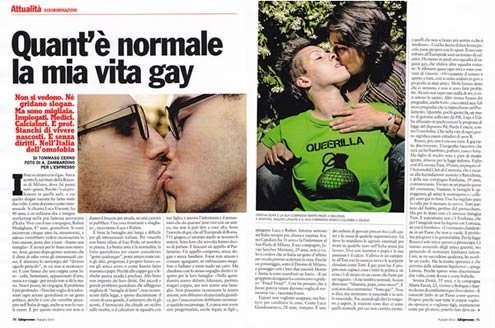 L'Espresso, June 2011: In Italy, a "normal" gay life is still reported as unusual, even remarkable
I

n Italy, religious beliefs, social traditions and unequal laws create and reinforce the invisible walls that divide gay and straight men. At times, I feel like we live in parallel but separate worlds, passing each other in its hallways but only bumping into each other when some thorny issue comes up.

Given the distance between us it would seem highly unlikely that any straight man and an openly gay man could ever cross the divide and become friends. But strangely, it does happen.

One evening, Guido, our dance instructor, arrived at our place with a handful of printouts for cheap travel packages in Eastern European countries. He had one day of vacation to use up before the end of the year and had decided that the three of us were going on a weekend get-away.

If this was a gesture of friendship, I certainly didn’t want to reject it, but why would a 28-year-old straight guy want to spend the weekend with a 50-plus gay couple?

I tried to sound enthusiastic and said, “Wow, great. When do we leave?” but added, “Remember, Alberto and I aren’t really welcome in a lot of these places.”

After he had left, I asked Alberto, “What was Guido going on about anyway?”

His reply: “Who knows what goes on in the brain of a straight guy?”

The next day Guido was still talking about “our week-end get away,” so I suggested Denmark. “At least Alberto and I would be legally married there.”

Guido assured us he would scour the web and find the best deals.

Afterwards, Alberto and I looked at each other and laughed. “We’ll believe it when we see the tickets.”

The following night, he phoned to let us know everything was booked. I looked at Alberto and said, “Oh this ought to be fun, a romantic weekend in Copenhagen, just you, me and our heterosexual dance instructor!”

The three of us wandered around the Copenhagen together, to the ethnographic museum, the hippy community of Christiana, and Tivoli gardens. Alberto had developed an instant craving for Gloch, hot mulled spiced wine, so we stopped often at various Christmas markets. Guido, who is from Sicily, a place where old men still display camaraderie, slipped his arm in over Alberto’s and the three of us wandered the city arm-in-arm. Nobody seemed to care.

It was cold and rainy and we still had a few hours to kill before dinner. I suggested, “What about going to a sauna?” Guido didn’t warm to the idea so we all ended up going back to the apartment.

Later that night we went to a Latin American dance club. It was, as I expected, small and crowded and entirely straight. I’ve seen how alcohol can act as a catalyst for violence against gay people, but this wasn’t an antagonistic place.

Alberto and I sat and watched while Guido danced with a few women. Alberto and I did not dance. We didn’t want to create a sideshow.

Afterwards, as the three of us walked home Guido said, “When I dance, I lose myself in the music and just let go. But this place was too small and crowded. I felt as if I was only going through the steps but not really dancing. I looked at him and shrugged my shoulders, “Hey, in a straight club, I always feel like I’m only going through the steps and not really dancing.”

As we headed towards our gate we passed a large coffee and pastry place decked out in kitsch and glitter, like Lady Gaga’s boudoir. Three hot guys in tight T-shirts served coffee to the beat of house music. Could this be a gay space in the airport? Like homing pigeons Alberto and I walked in. While Alberto ordered, I read the words printed in English on our server’s T-shirt. It had something to do with some attribute he allegedly possessed that “turns the ladies on.” I didn’t think it would impress a single woman on earth. Mixed with the smell of coffee I also sniffed out the familiar aroma of homophobia. I walked out without ordering anything.

Guido, Alberto and I spent the next hour waiting, reviewing our photos, looking at the magazines, admiring the muscles and laughing at the hammy poses. We joked and talked about sex.

Judging from the open, easy laughter and the time spent together in Copenhagen, it struck me that sometimes gay and straight men can actually reach across the divide and find common ground and become friends. But I also realized that even in a place as progressive as Denmark, there are still invisible walls that divide us.