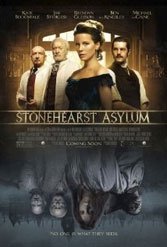 It’s Christmas Eve 1899. Oxford Medical School graduate Edward Newgate (Jim Sturgess) has just arrived at the “Stonehearst Asylum” psychiatric hospital, where he’ll intern. It’s a bleak and forbidding place in rural England that winter makes into a mist-shrouded Gothic outpost (with Bulgaria subbing for England). Edward is assigned to work with Dr. Silas Lamb (Ben Kingsley). Lamb, the acting superintendent of the asylum, is an enlightened Victorian, or so it seems. He’s set aside the crude and cruel methods practiced by predecessor Dr. Salt (Michael Caine), avoiding heavy sedation and patient shackling.

Among his more challenging patients is the stunning Eliza Graves (Kate Beckinsale), who’s been hospitalized for her aversion to any form of intimacy. Graves piques Newgate’s interest — until one night he hears sounds coming from her room and decides to check.

That, of course, is American director Brad Anderson’s cue to dig into the dark realities of the period-piece asylum, and he does it with melodramatic flair (Anderson’s credits include “The Machinist” and “The Call.”) “Believe nothing of what you hear and only half of what you see,” says the young Newgate, and he’s right. Stonehearst soon becomes the murky stage for a storyline that simmers between “The Shining” and “One Flew Over the Cuckoo’s Nest,” with hospital intrigue and crazy love both squarely in lunatic mix. He also delivers an endgame twist regarding who’s really in charge.

Based on Edgar Allen Poe’s 1845 story “The System of Doctor Tarr and Professor Fether,” which was set in a southern France mental asylum.