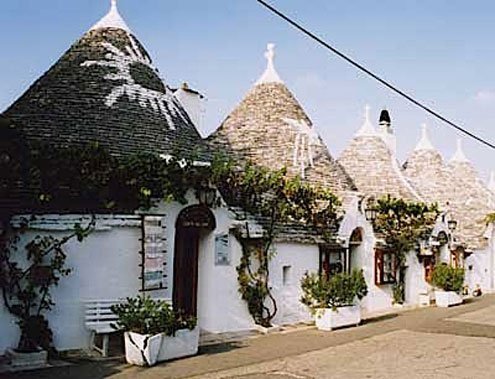 Trulli can be rented online.
W

hen we booked a “trullo” in Puglia’s Valle d’Itria for a week last fall, the agent supplied us with a lengthy explanation on how to find it. It ran like this: “Drive through Locorotondo and take the road for Alberobello. Turn off at the sign for Cisternino. Follow the road for about five kilometers till you get to a little road on your right. This goes towards Figazzano. About a couple of kilometers further on, you’ll see a small pine wood on the right and 100 meters after that there are two little trulli on top of a hill. Take the dirt track on the left and drive on up for another couple of kilometers and you’ll find your trullo. It’s the one with the big tree on the side. The owner will be waiting for you to give you the key.”

That’s until you come up against the labyrinthine road system in the rural south of Italy. After driving around in circles past identical clumps of trees and landmark trulli on top of hillocks, we gave up and phoned the owner. She laughingly agreed to come and meet us in the hamlet of Figazzano and show us the way.

With Maria to guide us, we embarked on a tortuous route that eventually led up a white dust track that ran through olive groves, almond tree orchards and vineyards. We drove past scattered homesteads with roses hanging over the wire fencing and hens pecking around the yard. Finally, we stopped in front of what looked like the nearest thing to the cottage of “Snow White and the Seven Dwarves.”

Tucked neatly behind a low stone wall under the spreading branches of the massive holm oak that had been cited as its distinguishing feature, our dinky little trullo looked homely and welcoming. Freshly whitewashed inside and out, it had three rooms, each one capped with the characteristic, dry-stone conical dome. A flight of stone steps on the outside wall led up to the roof, where the flat areas between the domes were originally used to sun dry tomatoes, figs and olives, and where we now got a great view over the surrounding countryside.

Until a generation ago, the house had been a family dwelling, and Maria had preserved most of the traditional peasant features. The furniture was fairly basic and hand-made in olive wood. Only the bathroom had a door. The other rooms were simply curtained off with brightly colored woven hangings. There was a hearth and a stock of wood, a kitchen corner with a sink and fridge and a well in the front court.

The house also came with five stray cats. Every morning they were outside, sitting in a row, waiting patiently to be fed from the doggy bags we had collected in the restaurant we’d been to the night before.

Things went smoothly until there was a power shortage half way through our stay. That meant that not only the lights weren’t working, there was no water either. That was when we realized that the well in the front court was not simply decorative. It supplied the house’s water with an electric pump.

Our boy scout days far behind us, we failed miserably in our attempt to draw some water from the apparently bottomless well with a bucket we borrowed from the farm opposite. However, the local people are not the type to leave hapless tourists in a fix. Friendly neighbors started rolling up to offer their help. In an hour or two, the power came back on and the crisis was over.

Despite its drawbacks, we became very fond of our little trullo. There is something rather special about living in a house which is some two hundred years old and which was built entirely by hand by the ancestors of the same family, using stones which they laboriously cleared from the fields. However, all trulli are not as spartan as ours was. Some have been modernized to a high standard of comfort, as we discovered when we visited some friends who had rented a trullo in the same area. Their trullo was positively luxurious, with enormous rooms, two bathrooms, a dream of a kitchen and a fountain in the garden that went on at the touch of a switch.

The Valle d’Itria, in the heart of the Murgia hills in central Puglia, is the home of these picturesque tents in stone, which are unique in Italy and the world. Nobody knows how they originated, but the building technique dates back to prehistoric times. Constructed entirely without mortar, the thick walls are effective in maintaining a comfortable indoor temperature, both in summer and winter. The gray dry stone conical roofs act as an effective insect screen. Many trulli have curious distinguishing features. Their domes are crowned with gleaming white pinnacles in various mysterious forms, and many have ancient magical pagan or Christian symbols traced in white across the front of their dark roofs.

The most famous collection of trullo houses is at Alberobello, which was 20 kilometers from where we were staying. This fairy tale place, listed as an UNESCO world heritage site, has a hundred trulli, some five centuries old.

Alberobello is a maze of steep, narrow streets lined with lively souvenir shops selling local crafts and gastronomic specialties. Many offer free wine tasting, and in some of the shops you can go up on the roof to admire the splendid view over the Valle D’Itria. We ate at the delightful Trullo d’Oro (Golden Trullo), Via Cavallotti, 29 (tel. 080.4323909).

We were staying just outside the charming little town of Cisternino. The historic center — an agglomeration of narrow alleyways and passages, steps and stairs, and balconied white houses that seem to have sprouted one on top of the other — has been proclaimed one of the loveliest old town centers in Italy (and that’s saying a lot!).

Cisternino has its own unique gastronomic tradition. These are the rosticcerie, which are different from the similarly named establishments found throughout Italy. These are little eating places with wooden tables and chairs set in front of the butcher’s shops, where you eat tasty bits of roasted meat fresh off the grill. Two good examples in the heart of the old town are Da Zio Pietro at Via Duca D’Aosta, 3 (tel. 080.444.8300) and Vacco Cervista, Il Piacere della Carne at Piazza Pellegrino Rossi, 7 (tel. 347.597.3313).

One of the delights of any Italian holiday, of course, is the food. Puglia is the home of the classic Mediterranean diet, based on an abundance of local produce such as olive oil, grains and legumes and all kinds of fruits and vegetables.

Local cuisine includes delicacies with unpronounceable names like gnummeredd (rolls of lamb roasted on charcoal), orecchiette (traditional shell-shaped pasta) that is served with a cima di rape (turnip top) sauce, broad bean puree and ciceri & trye (a chick pea, onion and pasta soup, a dish believed to date back to ancient Roman times). There are also great cheeses, like fresh ewe’s milk ricotta and seasoned pecorino, and wines that are beginning to make their mark on the international market.

Other places of interest to visit in the vicinity: the Castellana Grottoes — a string of caves with fascinating stalactite and stalagmite pinnacles and sculptures (34 kilometers away); the picturesque towns of Martina Franca, Locorotondo and Ostuni (all within a 20 kilometer radius); Grottaglie for ceramics (36 kilometers); and the slumbering city of Lecce with its magnificent baroque buildings some 90 kilometers away.

About the Author: Margaret Stenhouse

Scotland-born Margaret Stenhouse has lived most of her life in Rome. She arrived in the early 1960s expecting to stay six months. But La Dolce Vita had other plans. After a checkered career of babysitting, teaching English and working as a tour guide, she returned to her former love — writing and journalism. She has published a book on the goddess Diana of Lake Nemi in the Castelli Romani hills, where she now lives. She is married with three sons, two grandchildren, a cat and an Abruzzo sheepdog.