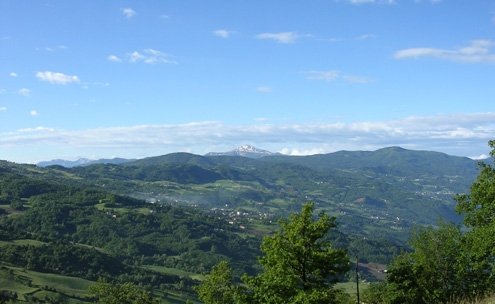 he day after a family wedding in April, my husband Marino and I need a walk before sitting down for my mother-in-law’s Sunday lunch. We set out from her stone cottage, where she was born, in the village of Monchio, on our favorite two-hour circuit route.

Monchio is on Monte Santa Giulia, a mountain of 1,000 meters, in the province of Modena in Emilia-Romagna, a region which runs across Italy from Liguria to the Adriatic Sea at the points where the Italian peninsula begins to squeeze into its boot-like shape. The Po River bounds the region to the north, while to the south the Apennine mountains separate it from Tuscany.

We start from Via Casa Ponzi and opt for an easy climb of 400 meters on rolling countryside, overlooking the three river valleys of Dragone, Dolo and Secchia, carved from the waters running down from the long crest of Monte Cusna and the pyramid peak of Monte Cimone.

Both mountains mark the border with Tuscany. The red lights on the military antennas blink above the snows of Mt. Cimone (2,165 meters), the highest mountain in the area. Off-limits during the Cold War, its summit now also hosts climate study stations.

Past the houses, the street becomes a farm lane flanked by violets and many varieties of cherry trees. We keep to the left whenever the lane forks.

Then we see something new — fences around the vegetable gardens in open fields.

When I first came here in 1983, there were no roe deer but in the last five years, they have moved in and increased.

We meet cousin Carlo returning from a walk; not on his usual run because he was at the wedding last night, too.

“Deer up the lane in the high fields,” he says.

We spot one eating spring grass in a meadow. It stands still and so do we. It moves further up and then a fawn pokes its head out of the line of trees.

The meadows and farmers’ fields are divided by copses of wood and small ravines that can’t be farmed. These are well-kept wood lots — still precious as a source of firewood and homes for deer.

Further on, we see a swift flowing stream in a gully. Something moves!

“Fox! Never seen one here,” I say. Its long bushy tail disappears into the wood. A rooster crows.

The lane finishes at a quiet road, Via La Campagna, and we turn right, passing the largest farm in the area. At another farm, an elderly couple are planting their vegetable garden. Two ancient dogs watch them work.

“E’ una bella vita per loro!” the woman calls out.

Everything changed. People left for the cities. Those who remained farmed part-time producing milk for parmigiano cheese, and worked as muratori building houses or ceramic tile factories down on the Pianura Padana, the huge fertile plain shared by Emilia-Romagna and Lombardy.

This year wheat has been planted for biofuels, which makes the munching deer a nuisance.

At a water tank deposit, we turn right onto a ridge dividing open fields. A hare leaps across our path towards the Rossena Valley. We walk on old oxen roads lined with strawberry flowers in the woods. In the dried mud, we find a crisscross of animal prints.

We keep left and pass an isolated house with newly planted fruit trees; their trunks protected from the deer by wire mesh. Chestnut trees and blackberry bushes are in flower. We are completing the circle and Monte Cimone comes into view again. The road forks on a windy crest marked by a cross overlooking the Val Dragone. On the other side, the pianura is visible.

A climb on the trail to the right takes us into the Parco della Resistenza and the top of Monte Santa Giulia where its rebuilt Romanesque church sits on the site where a bronze age sword was found. The original church was destroyed during the war. This was part of the Gothic line and sculptures commemorate the resistance and the massacre of 130 local men in 1944. There is a restaurant and information center. In summer, families from the pianura come to barbeque and walk the nature paths in the park.

We take the road down towards Monchio to the first house on the left, then a shortcut on the right, marked by red and white striped Club Alpino Italiano signs. Marino finds a deer antler, the first he’s ever found here. We look over the valley to the town of Montefiorino where there have been recent sightings of wild boar.

The fresh mountain air has made us hungry. We head home to homemade tagliatelle and ragù, local specialties.

Driving from Milan: Autostrada A1 to Reggio Emilia, direction Sassuolo to Castellarano, then Lugo. Follow signs for Palagano.

At Monchio, park in the square and walk back to Via Casa di Ponzi. Alternatively, follow signs for Parco Monte S. Giulia, start from parking lot near info centre.

By train and bus: Trains stop in Modena and Sassuolo. A bus is necessary to get to Monchio. For bus information, in Italy call 199.111.101 or see linee extraurbane, Monchio, linea 610.

Where to stay Lodging possibilities are mentioned (in Italian) at the Biongiornobb website.