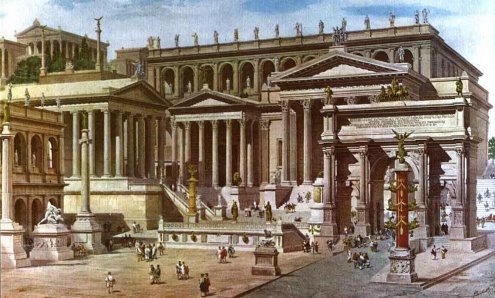 Stone City is a richly imagined leap into a long-gone era.
A

nna Lowenstein’s debut, “The Stone City: A Captive’s Life in Rome” (Mondial Books, 2016), is a richly observed historical novel in which a Celtic girl named Bivana brushes up against groundbreaking events in the autumn of the Roman Empire.

Resilient Bivana is introduced at age 12, part of a family that lives in a thatched-roof farming community in the Durotriges tribal territory now known as Dorset, England.

Staying alive amid marauders is the primary challenge for the villagers. Early on, Lowenstein hones in on Bivana’s keen alertness, a quality that will serve her well later on as a captive and slave in Nero’s Rome.

Bivana’s village life is so isolated she “knows” little more than what she can see, which from a hill includes the neighboring of village of Dobonni to the north. The rest she must imagine, and visiting storyteller Morimanos is a big help. He says the sea is a day’s journey on foot and speaks of a vast city across the sea and “the legendary kingdom of Rome” whose citizens live “one above the other … with people walking around over their neighbors’s heads.” All in Rome, he says, is made of stone.

To Bivana, this city seems both fabulous and remote. Until Roman soldiers march up the thin chalk hill paths that lead to her settlement. They’re less interested in plundering than ensuring the territory is under Roman rule by enslaving its residents.

Bivana and other captured village women are shackled and shipped off to the Imperial City where their wild and waist-length hair is sheared and they’re auctioned off as slaves. Unaware of Rome’s bustling market for wigs, the young women respond to the humiliation in tribal terms. Sheared, they see themselves as stripped of personal identity. It’s an important detail since Bivana and the others will turn a blind eye to occasional opportunities to escape.

Though her Roman keepers change her name to “Barbara,” they fail to diminish her eagerness to observe all around her. She bends but never breaks. When a slave overseer pityingly gives her a tiny statue of the Roman goddess Fortuna as a gift, she treasures it, still believing in the earth and water spirits her tribe once petitioned for help. More than two decades later, when her freed-slave husband Philon tries explaining the presence in Rome of the Nazarenes, a new and controversial sect that believes in Jesus, he stops short. “But what can a barbarian understand!” Or wish to.

Yet Bivana clings to curiosity, giving Lowenstein an ideal insider and an absorbing narrator. In Rome, everyone seems to be in a hurry. Just as Morimano said, they live in layered homes, one atop another. As for the ways of the Empire — business, trade, and law — Bivana pays them little heed unless they concern the local language, which she’s compelled to learn, or on her home chores. Though Bivana adjusts to her new life, she never discards her roots.

She’s delighted by the birth of Orestes, her first child, yet leaves his education to Philon, a Jew. What good would it do to teach her son the farming skills she knows so well? The stone city has no open fields.

Orestes is an adult when she notices that Philon has stopped taking him to the Temple. Instead, father and son now attend Nazarene meetings. They’re Christian converts. Once again, she’s an unwitting but privileged observer to upheaval. The disciples Peter and Paul each visit Philon’s home. Conversation between them reveals what the Scriptures do not: that the religious leaders are at odds in their interpretation of Jesus’ teachings.

This fascinating sidebar is interrupted by another slice of history: the Great Fire of Rome. When flames engulf Bivana’s street, she and her family find refuge in a Nazarene home. She’s surprised at how they all dream joyfully of one day dying in order to enter Eternal Life. Never one for abstraction, she dismisses it as bluster.

Yet when the Nazarenes are accused of having starting the fire to satisfy their wish for the end of days, Philon and Orestes are both arrested. A bribe from Bivana frees Philon, but imprisoned Orestes won’t budge. In fact, many Nazarenes walked into the lion’s den smiling and singing.

With Rome receding into the past, Bivana and Philon head for a countryside homestead with their new infant daughter. Bivana mourns Orestes, but true to her indomitable roots finds consolation in the prospect of returning to farm life and teaching her new child what she knows of the deep rich earth.

Lowenstein situates Bivana in one of the most crucial and tumultuous times in ancient history. Thanks to Bivana’s voice, her novel represents a vivid leap into a long-gone era.