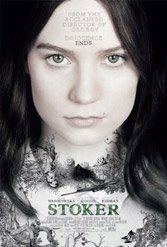 Acclaimed as blood and gore guru with a deft movie mind, South Korean filmmaker Park Chan-wook tries making a credible 21st-century Hitchcock knockoff by relying on fraught clues, abundant visual tricks, and transparent sexual innuendo — all of them to flesh out what seems from the start like a heavy-handed conclusion: that something’s horribly awry the rich Stoker family.

Park opens in the aftermath of the mysterious car crash death of Richard Stoker, father of teenaged India (Mia Wasikowska) and wife to suspiciously grief-immune Eveyln (Nicole Kidman). Both are of country club stock, locked into a nondescript Connecticut universe. They are rich women trained to speak wryly and play classical piano after dinner. Enter Uncle Charlie, Charles Stoker (Matthew Goode), Richard’s estranged, elegant and eerie brother who says little, has a murky past, and slowly if improbably sneaks into both the mental and vaginal vaults of both mother and daughter, to different if sinister effect.

Uncle Charlie’s wicked inscrutability helps court and spark teen India, whose intuitive powers are manipulated to give the story an erotically paranormal feel (at the start, a smitten spider crawls up her leg and vanishes under her skirt; blood drops follow). Like an orange peeled by a razor, at least in terms of pace, India and Uncle Charlie are pushed into an inevitable, and lethal, slow dance.

Park’s strength is also his shortcoming: he’s all about style and its menacing little half-steps. He demands you embrace his mystery and stick with it, no matter how unabashed the contrivance (Stoker, after all, is homage Bram Stoker, the author of “Dracula”). Overall, it’s a sincere but tedious effort that forces India, Evelyn and Uncle Charlie into a moody movie-length groove. There are twists and turns — and, finally, raging horror — but few true surprises. This never announces itself as a killing spree film, but the sensory poison is evident early on, a mixed blessing when it comes to suspense.