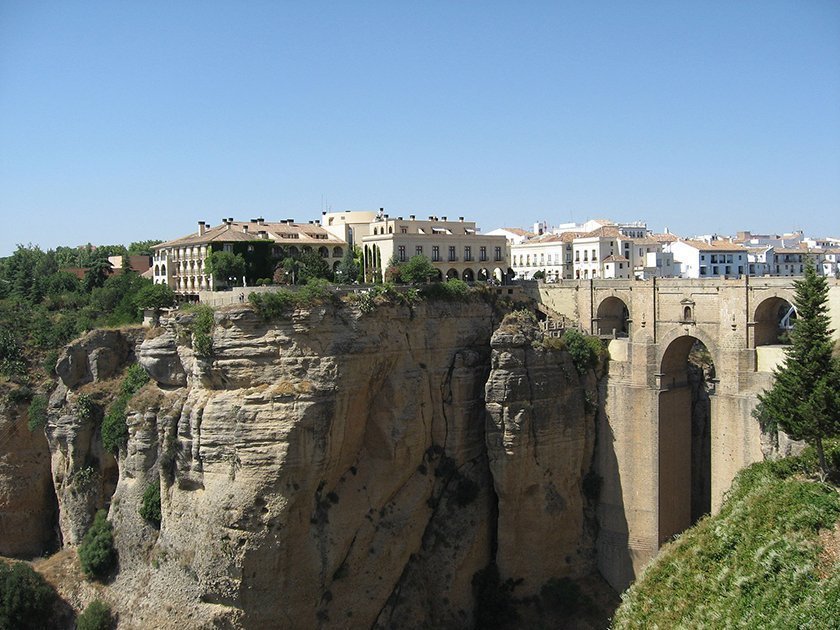 The Spanish city of Ronda was founded as a fortified post for the Romans during the Second Punic War some 2,200 years ago.
A

ncient and medieval societies spent a considerable amount of time situating their dwellings behind daunting walls or atop rugged hills. If enemies wished to advance, they would first have to confront these obstacles.

The walled-off or hilltop city was also a defense against disease, since travelers from afar might also be carriers of contagion.

Outsiders, aliens of a sort, were often looked upon with suspicion bordering on trepidation. Fortifications and altitude provided safety against hinterlands often described as dangerous if not monstrous.

Sickness within these citadels, however, was God-sent, best coped with through prayer, resignation, and, occasionally, the expulsion of the sick in the name of the common good.

The American novelist Ernest Hemingway took a cue from these traditions by associating level ground with danger and mountains with safety. What threatened in the valley receded in the hills, where all was clearer.

Medicine applied the same thinking to the early treatment of tuberculosis. With no drug to cure it, victims could seek refuge in mountain sanatoriums, where healthier air circulated uncontaminated by excessive human traffic. Those who could not afford the hills were sent to hospitals by the sea, another source of purity.

For centuries, the only existing medical care was natural, so much so that early hospitals were greeted warily. To be situated among the sick seemed mad.

The 21st-century onslaught of the corona virus has largely overturned such thinking. But vestiges remain.

Stripped of its trimmings, a lockdown, though an urban phenomenon, is nonetheless a collective retreat behind walls or into hills. A mask is like a knight’s helmet of old, insurance. Protection and confinement are as related as ever. A retreat from the collective is advertised as central to the banishment of the enemy.

The response to the virus has, to some extent, mimicked the ancient response to threat. Watchtowers have gone up. Travelers are suspect. The view from governmental citadels sees borders as the ancients saw moats, walls, and distancing from the contaminated, whether by illness or “flawed” faith.

The view from governmental citadels sees borders as the ancients saw moats, walls, and distancing from the contaminated.

Though the web is a new tool, many of the human responses it now hosts echo the moat and hilltop eras. In the name of barriers, schooling has been removed from specialized buildings and returned to homes. Business is transacted through Zoom, a new age middleman to avoid any descent from the hill. All the world can hunker down as it did when those who ventured into the wild were soldiers, heroes, or priests, in this age replaced by doctors.

Not even world wars limited travel to the extent it is limited now, since during recent wars many major nations, including the United States, were not affected domestically. If there is a subliminal American comparison it is to frontier days, when homesteaders patrolled day-and-night against marauding intruders.

But hilltop life, literal or figurative, comes at a price. As in olden times, it at once protects and frightens. The world at large, not everyone’s for the taking, is tainted by the peril of the unseen. Dangers associated with the so-called developing world now apply everywhere. Unsettled if not undone is the implicit modern conviction that the risk of serious contagious disease had been neutralized. As a result, the full-scale revival of the very un-ancient pursuit of mass tourism may take years. “Safe” travel may seem far more appealing, just as safe sex did for the decade following the revelation of the HIV virus. Your own hilltop may be your own best castle, at least for some.

For a time (how long is anyone’s guess) walls and hills may seen as comforting as they were centuries ago.

It’s worth noting that not all protected cities that were successfully breached chose to rebuild. Some chose to recreate themselves elsewhere to blot out the stain of the past. Some sought even deeper remoteness. Others, especially those affected by natural calamities, came to believe deities had chosen to make a point, so they moved on. Invaded Troy lost its agency. Many are the ghost-towns abandoned because industry failed or youth moved to cities. There is no assurance the chastened will resume their lives as they did before.

Like those who chose not to re-establish residency in a ruined town, moderns, their choices often governed by apps and their like, may regard viral hot zones of old as places they’d prefer not live in. Some will forgo group settings even when given medical assurances there is no more to fear.

Moderns, like ancients, can panic, hide away, and crave shelter from the storm, at times taking rumor to heart.

Some may alter their lives and traditions in order to make peace with nagging fears.

These choices may be temporary or permanent. No data exists to measure the extent and depth of human consternation.

The burden of the enlightened is the expectation of informed and rational behavior. But instead of behaving reasonably, people panic, hide away, and crave shelter from the storm, at times taking rumor to heart.

No one will take to hilltops or settle behind barricades after the virus abates its scorched earth visitation. But aspects of malaise so feared by the ancients may persist. Just as villagers were undone by known riders outside their fortifications, so moderns will be quick to construe any fever into the plague. The arts, which demand congregation, will suffer most, as will restaurants, which depend on a carefreeness of spirit that may well remain holed up.

For the foreseeable future, specific symptoms will court phobic, perhaps even paranoid thinking, in metaphorical terms walling people off from the inside.

The walled cities and hilltop towns of yesteryear will penetrate the symbolic landscape of the modern mind, carrying the weight of mortar and playing on the animal sensitivity to peril that dates to the beginning of time itself and overrides all else.