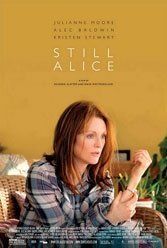 Dr. Alice Howland (Julianne Moore) is an acclaimed professor of cognitive psychology professor at Columbia University. Though she’s a youthful 50, she’s started noticing memory lapses. She’s too self-aware to let it slide and once she does get a diagnosis it’s a chilling one: she has early onset Alzheimer’s.

Co-directors Richard Glatzer and Wash Westmoreland manage to illustrate Alice’s life-changing dilemma without resorting unduly to cliché or excessive sentimentalism, a pleasant change given Alzheimer’s role as frequent fodder for weepy drama. Alice is vibrant, brilliant, has a loving husband (Alec Baldwin) and a promising career. But all that’s in jeopardy because she’s essentially slipping away step by small step.

Still, Alice puts up a humanly honest fight, and that’s the complex if painful dimension on which the film focuses. She’s fortified by daughters Anna (Kate Bosworth) and Lydia (Kristen Stewart), the latter the artsy black sheep of the family who will eventually stands tall. Alice pushes one basic principle, and given the nature of the disease and her own inevitable slippage it’s an essential one: Live in the present. Moore’s performance is superb if sometimes agonizing to watch. Based on neuroscientist Lisa Genova’s 2007 novel of the same name.