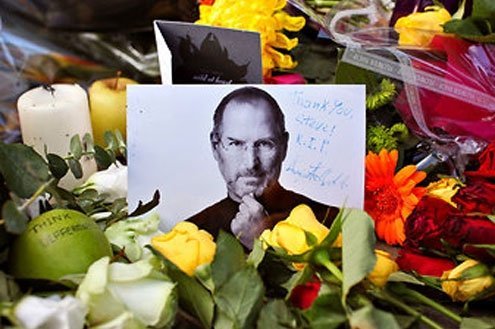 Jobs in 2005: "Don't let the noise of others' opinions drown out your own inner voice."
T

he aptest comment on the death of Apple’s Steve Jobs may have been a one-line tribute published among thousands of others on The New York Times website. It read: “I didn’t even know the man and I’m sitting here crying.”

The gift of Jobs’ remarkable devices, particularly the ones cooked up over the last decade, has been to give an increasingly extroverted population means to circumscribe if not define the most basic postmodern human cravings, namely constant communication (erasing the out-of-touch); the transmission and sharing of empathy (and disdain); and the defeating of aloneness, now judged as a negative. The latter may be the most important of the three, since negating aloneness is vital to a secular spiritualism that replaces self-reliance with membership in online tribes.

Jobs’ magnificent toys, descendents of the digital awe inspired by “Star Wars,” have given global residents unheard of means to distract and amuse themselves, either in solitude (through music or video or text messages), or in linked, no-frontier relationships with peer groups including family, friends, acquaintances and strangers. Prodigal tie-ins casually named applications have embroidered and streamlined the thinking process, fitting into a latter day Hollywood “cast of thousands.”

Mindful of star power, Jobs made his machines into celebrities and developed an up-with-people message that encouraged the provincially hemmed-in to charge into a kind of full-bodied, unfettered global geography whose “hungry and foolish” outline mocked decorum and canceled out the maudlin. As a result, strangers now “know” one another casually in what amounts to a leveling of the collective familiar. Pre-Jobs, only exceptional events, mostly war and assassination, furnished such uniting ground, and only television, also a recent invention, filtered and manipulated it.

This enlarging process by itself ensures Jobs’ immortality.

Increasingly righteous Apple now advertises connection as a populist virtue whose fruits border on the miraculous (how else can an adopted 10-year-old girl in Finland chat with her rural Chinese grandmother?) Until 1989, linking up an ideologically sliced-up world seemed improbable at best. It’s no accident that the self-made Jobs and his teams of fireworks-makers came of age after the bloc system was dismantled, and with it the end of impulse control imposed by any number of regimes.

But that’s another story.

The only Devil’s Advocacy the Jobs legacy permits is whether relief from aloneness, a relentless process of including, breaching and broaching, represents a “let there be light” hosanna, or whether his beloved devices must also be included as warlock harbingers of what’s destined to become a planet dominated by indiscriminate intrusion and interruption, undermining meditation and fracturing the verbal consistency of human discourse.

It’s a debate that arose with the invention of the telephone (which many resisted) and television (also resisted), though neither had online sweep. Anti-modernists worried that unfettered chatter and limitless watching could dilute the contemplative moments championed by church attendance or Catholic Mass, social requisites that emphasized silence and reflection to help encourage loyalty and focus. The Communist party system did much the same. The idea was to limit voices and choices to control a human impressionableness seen as vulnerable to distraction. Compliance required concentration, which was often coerced.

That joker is now wild. Coercion is outdated, and with it thinking twice. Removal from the collective narrative, defined in theater through intermission and in bromides with “sleep on it…” is incompatible with a Jobs-world in which intermissions are both unwanted and unwarranted and the contemplative perceived as a time-wasting interference in the immediate demands of action and reaction, sharing and receiving. Distraction, made to deny its own existence through multi-tasking, is central to the 21st-century self.

Jobs’ devices also encourage complete and constant shedding, of details and data, sensations and secrets, which anti-totalitarians can (and have) hailed as a great liberation, but which critics can (and have) cautioned as possessing the power to transform expression into a vivid but unabridged chaos that informs and confuses in equal measure and, in the hands of casual communicators, pillories silence as an affliction.

Inventors scheme and make. Society responds in kind, applauding and buying what it likes. Jobs was always as good a salesman as an inventor. He loved stage-center and patent medicine-style proselytizing (“Don’t let the noise of others’ opinions drown out your own inner voice.”) He impressed his devices as essential. In typically brash American style he paid no mind to the oil-and-water rapport between connection and interruption. All communication was for the sentimental good. Transmission was bonding. When he made a telephone into a computer, and vice versa, followers leapt from the woodwork. By then, multi-tasking, a precarious concept, had been entered into the pop vocabulary and the device-driven need for shared feeling (and crying, even for Jobs) became standard.

Thanks to Apple and Jobs, telepathic empathy set to music and images are now standard to an ever-more-contrived imagination. Immediacy’s availability is at once appetite and food, dream and drug. Only a genius can persuade humanity that he’s made what it wants, to the also make it into what it needs.

If there’s a Devil’s jury, it’s still out on whether Jobs’ menagerie of tackle will ultimately be known for the transformational gift of linkage or a shrinkage in the role and worth of intermissions. What now seems like an easy call in Jobs’ favor may be far less so in the coming centuries.