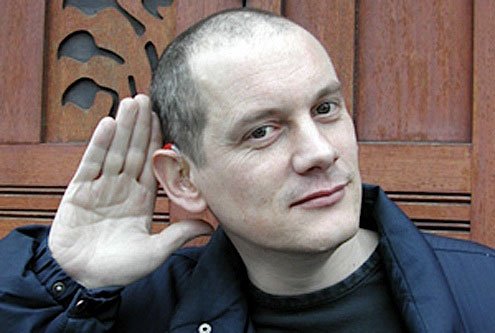 I just want to be funny and am a guy who happens to be deaf, but I’m not scared to use it.

Londoner Steve Day sometimes tells people he’s 75 percent deaf — “to add a bit of glamor,” he explains. He lost his hearing at age 18 and used the disability to rationalize doing very little for nearly two decades. But finally, after a stretch in the United States, Day decided to try doing what he’d always wanted to — stand-up comedy. Now 41, a father of five, and with seven years of comedy work behind him, Day is among Britain’s top acts. He is renowned as the country’s only deaf comedian. “If there are others,” he jokes, “I haven’t heard of them.” In November 2005, he performed to sell-out audiences at the English Theatre of Rome. As always, his routine combined humor with a motivational message. Edward Pentin spoke to Day backstage.

What did you do before comedy?

I was a computer programmer and I hated it, but it was something I could do. It was just “look and program.” It took me to America, but I wasn’t very good. They had the year 2000 thing and they desperately needed programmers — they had people in prisons programming. They gave them a job as a programmer because they could still do it. But for the last three years I didn’t do any work at all… I did a couple of conference gigs at work and that gave me two year’s grace of not having to do any work. And the deafness helped. I’d bung it on a bit at work and so that helped me a bit. But it got to the point when I just couldn’t keep on stringing them along, and in all conscience I just couldn’t keep on doing it.

Do some people get offended, thinking you’re exploiting your deafness?

A bit. And I am, I make no bones about it. It’s a unique thing and it’s a balance between using the uniqueness and being a comedian. I just want to be funny and am a guy who happens to be deaf, but I’m not scared to use it. Well, why not? It’s been crap for twenty years. It’s been horrible. But why not make the most of it. So I do. But I’m always careful with my act — this [Rome] was a more “deaf” show than I normally do. If it was a half hour of comedy, about a third would be anything to do with hearing while this show was predominantly about that.

Do you know of many other people with disabilities who have followed your act and gone on stage as comedians?

There are quite a few, and it’s more and more. When I started there wasn’t really anybody, but I’m not a trailblazer. The market’s not that big, but I do encourage people because at the end of it people will be surprised at a deaf comedian. Again, I’m working to put myself out of business! Some deaf comedians find it hard, though, because I’m [the] established deaf comedian in the UK. But there should be more than one. They used to say there was just one black comedian [in the UK] who was Lenny Henry and that made it hard for others to break through. “No, we’ve already got one,” they’d say which was so ridiculous but that’s the way people are. But that’s changed and I think disability will go along the same lines.

Well I get on better with people with other disabilities than I do with deaf people because they’re not so close. You know, the big “d,” little “d” thing [Day jokes in his act about how deaf people sometimes differentiate themselves by the severity of their deafness — “Deaf” meaning severely or completely deaf while “deaf” means only partially so. For Day, deaf people emphasize this, so he mocks it — to the annoyance of some]. Some people come and they really enjoy it, and I’ve had lots of emails. But I get a few that say, “You’re horrible.” I don’t know why, I think it’s because I make jokes about deaf people and they think I’m making jokes about every deaf person which I’m not. I’m usually referring to someone who happens to be deaf but is an idiot, and some people find that difficult.

My wife’s black, for example. Does that mean I can’t do jokes about my wife? I’m not insulting all black people, you know. But with people with other disabilities, there’s so much in common but enough distance for them not to think it’s too personal. The show I did called “Funny People” [a recent act Day performed in Edinburgh with a group of people with disabilities, including several dwarfs] was really successful because it was different. None of us were politically correct. Midget is not a word you can use for small people — I didn’t know that. But they used it all the time — they reclaimed their word. Some people were shocked, but others thought it was absolutely fantastic.

It’s probably been said in the past, but it must be nice for you not be able to hear the hecklers.

Yeah, it’s been a big advantage. But now it’s not because I can’t “play” and I think I’m good enough not [to have to] hear them… I have jokes about “mishearings,” but you can’t keep doing that. I ask them where are they from, they tell me some place, and I say, “Oh, the Falkland Islands.” Which is all right, but it’s a bit pat, you know? It was good three years ago, but now it’s rubbish.

Some say that London’s Comedy Store is where a comedian “makes it.” Did you feel that way when you performed there? Yes, well the story about the toilet handle is absolutely true, that was one of my worst ever nights — I just wanted to go home and cry! [just before going on stage, Day had broken the handle to the backstage toilet, but overawed by the occasion, he inadvertently brought the object on stage with him].

What are your future plans?

I don’t know. I’ve done some acting on the radio… I like the radio, but I don’t care what I say because I’m not going to listen to it. I can do what I want! I just want to keep touring and gigging. I just like doing it. For so many years, I just felt down and negative, and this is the best thing to do. If I just carry on doing what I’m doing, I’ll be happy. I’ve got five kids so it’s quite hard to keep it all solvent but as long as I can do that, still do comedy, I’ll be all right — I do it every night. Don’t tell them, but I’d do it for nothing.

More about Steve Day at: www.gsohcomedy.co.uk/steveday2005/

About the Author: Edward Pentin

Edward Pentin, a Canterbury, England native, assisted with Newsweek's coverage of the papal election and is Rome correspondent for the National Catholic Register. Since graduating in international relations at the University of Keele in England, he has taught in Tanzania and spent two years working in an international school in Switzerland. He has a Masters in justice, peace and mission studies.