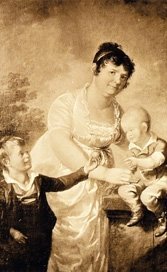 n Italy, stepmother is a dirty word with an ugly sound, matrigna. It has none of the loveliness and melody of what to me is the more accurate French equivalent, belle mère. True, not all stepmothers necessarily want to be either belles or even very mère-like, but sometimes it comes with the territory — and the consequences can be painful.

Tomorrow, my Italian-American stepdaughter, her diplomat husband, and four children are off on assignment. This isn’t new to them. They’ve already been stationed in South America and Chile.

Still, large pieces of my heart leave with them, making this departure especially poignant.

The breaking away began in Chile, where my stepdaughter created a true home for her family. She was no longer my husband’s little daughter of seven (when I “acquired” her) but a full-fledged diplomat’s wife, nearing 30, running a Chileanménage, finding schools for the kids, learning Spanish while earning a second MA from the University of Chile.

Mostly, she made it look easy. But to me, it seemed daunting. Why, I ask myself now, didn’t I see the full picture? Or rather, why didn’t I wait to be asked before stepping in to “help”?

Well, first of all, I’m a Texan. A Texas woman is one who — as a guest — offers to sous chef in the kitchen. She tries solving problems even when she doesn’t really have answers. And that’s what I did with my stepdaughter.

I saw a mother of three going under for the nth time and decided to try to “help” with the kids. I also offered to baby sit the new dog.

Never call a stepdaughter in a panic. To me, the puppy looked peaked. On death’s door even. Then again, what did I know about dogs? I’m a cat person. I followed up with, “Has she had her shots?”, “Has she been this way for long?” Translation: Have you done the right things for this dog?

That was the beginning of our problems. In looking back, I recall more incidents of “helping” that might have poked little holes in what had started as a loving relationship, one that my stepdaughter said recently used to be “full of fun.”

I see — but only now — that I took over her space by endlessly playing with the kids, creating projects, offering to make dinner, even when she was becoming a serious cook. My poor stepdaughter. I wanted to bond, but she didn’t want “help” — even if at times she showed signs of cracking; even if she sometimes appeared to the world (read, me) that she might pack a bag at any minute and join an ashram.

To help avoid that (note the word “help”), I even offered neck relaxation massages readily accepted but I didn’t know were part of her stress. Bonding sometimes equals burden. A shoulder to lean is offer much sturdier.

I wish now that I’d hung back more, without curbing my Texas enthusiasm for life and sometimes overwhelmingly gregarious tendencies. Stepmothers should not be, cannot be automatically accepted on the basis of good intentions. They cannot and should not wish to replace a very special mother (certainly not a living one!). They must curb saying aloud what they feel, however heartfelt: That the divorce that led to “step-status” was “all for the better” and that all should come to accept that after more than three decades.

They shouldn’t be so naïve as to think children are created equal or that daughters should be as at ease with stepmothers as stepsons (who was age two when the father left and has no memories of much of the pain).

A stepmother must never assume she has an automatic place in the family’s core. Though she may be lovingly accepted by ex-wife, cousin of ex-wife, and friends of ex-wife, she remains stepmother and stepmother only.

My stepdaughter helped clear the air.

“I loved coming to your house,” she told me. “You are such a wonderful host and I felt so relaxed and at home there! But you know what, you’re a lousy guest!”

The remark roiled my Texas blood but I loved it. She was right.

So, on my next visit (assuming there is one) to my step-grandkids, I’m heading for the sofa with a good book and some bonbons until asked to participate further.

In short, the most useful and intelligent thing a stepmother can do, along with loving her step kids forever, is step out.