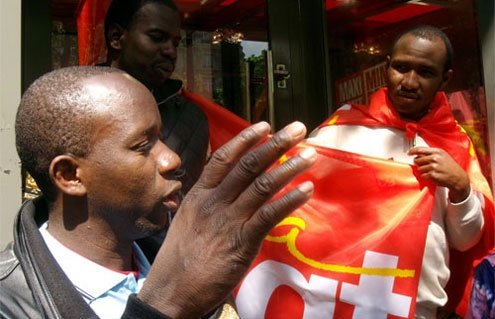 They make it seem as though we're all criminals. We're not.
I

n Milan’s Via Paisiello 5, Nelly Diop, a young woman from Senegal cooks up African take-out dishes. Her store is colorfully decorated with African print fabrics. An Italian lady, ordering couscous with veal and prunes, assures me that Nelly’s cooking is light and not too spicy, “the way we Italians like it.”

In November, inspired by a French protest, Nelly and her Cuban friend Daimarely Quintero decided to organize an immigrant strike in Italy. Nelly says, “It was Daimarely’s idea. We wanted to show how important immigrant labor is for the economy.”

They were joined by Stefania Ragusa, a journalist for “Glamour” magazine, and Cristina Sebastiani, of the National Association for Social Progress (ARCI). Together they created a group on Facebook: “Primo Marzo 2010, Sciopero degli Stranieri.” Sicilian artist Giuseppe Casibba designed their logo of eight faces. Their mascot is Mafalda, a popular cartoon child created by Argentinean artist Quino to promote human rights and world peace. They urged immigrants and Italian sympathizers to stay home from work on March 1 if at all possible, to boycott shopping, and to wear something yellow.

The women also wanted to protest a growing climate of racism amplified by the media. Nelly told me, “They make it seem as though we’re all criminals. We’re not.” Crimes committed by foreigners get front-page treatment, she says, while similar crimes by Italians are often buried.

In research commissioned by national and regional Italian governments, presented recently to the lower house, nearly half of Italians between the ages of 18 and 29 expressed xenophobic or racist sentiments, indicating that racist sentiment is on the rise.

Human rights groups and Italy’s European partners have expressed concern over recent developments in Italy. Legislation has made illegal immigration a criminal offense, punishable by fines of up to €10,000 and up to four years in jail. In Rome, Milan and Naples, army troops were deployed last summer as part of a crackdown on illegal immigration. An emergency degree gave official permission to form citizens’ street patrols. Roma (gypsy) communities were fingerprinted.

Nelly laments that, in all this, nothing is being done to assist integration. She says the European Union has funds available for integration but Italy is the only country that doesn’t use them.

When Nelly first arrived in Italy with her Italian husband, she worked as an integration coordinator in elementary schools, helping African children understand the language. Twice a week, she sat in class with the children. The teachers weren’t happy at first but, after a few months, they were grateful. “You should hear those children now,” Nelly says. “They speak like Brianzoli.” Nelly lost her job when, under Ombretta Colli, as provincial governor, funds were cut.

Nelly told me that, initially, unions and human rights groups were unresponsive to their idea. “After all, who are we? Nobody.” But the Facebook group kept growing. Eventually a rainbow of Italian rights and labor groups endorsed them. Many smaller unions also staged strikes. Larger unions participated locally. In Milan, the nation’s major unions, the CGIL and UIL, helped protestors obtain permits, paid for balloons and organized a march. Demonstrations were staged in 60 Italian cities.

In Italy, this marked the first national gesture of protest and solidarity since violence two months earlier in Rosarno, Calabria, an area tightly controlled by the criminal organization known as the Ndrangheta. On Jan. 7, white youth in a car, fired air rifles into a group of African immigrants returning from work as day laborers in nearby citrus orchards, where they earned from €15-to-€25 a day and lived in cardboard shacks inside an abandoned factory, in appalling conditions of filth and degradation. Immigrants responded in mass by burning cars and smashing windows. They shouted, “We are not animals.” They clashed with police wearing riot gear and with residents, armed with clubs and iron bars. In all, 66 people were injured, including immigrants, residents and police. The Africans were eventually evacuated to centers in Crotone and Siderno.

The violence in Rosarno brought to international attention a situation that has existed in southern Italy for nearly two decades. Internal Affairs Minister Roberto Maroni’s response that Italians are too tolerant with illegal immigrants ignores the role of organized crime in both the trafficking and the brutal exploitation of immigrants. It also ignores the fact that without them, small Italian farmers are unable to compete in a global economy. The uglier face of globalization come home to roost.

Ezio Casati, head of Milan Province’s social policy, has said that foreign labor is by now indispensable. The members of that indespensible work force are impoverished enough to accept working long hours for a low salary, without job security or safety regulations. In Italy, immigrants clean streets, build buildings, harvest oranges, care for children and elderly, and make pizzas. It’s not that Italians don’t want to do the work. They simply don’t want to do it on those terms.

On March 1, in Milan, demonstrators met at 9:30 a.m. in front of city hall, in Piazza alla Scala. Most of the 1,000-to-1,500 demonstrators were Italian students and retirees. They donned yellow ribbons or scarves and waved yellow flags. Some carried national or union flags. Several waved the Communist hammer and sickle.

I asked a Peruvian girl why there were so few immigrants present. She said it was because domestic workers especially, were afraid of losing their jobs.

Nelly told me that many immigrants didn’t know about the demonstration because they don’t use the Internet. She said that next year she and her friends would contact immigrant groups directly and they would hold demonstrations in the evening, after working hours. They would emphasize a strike against buying. “It will be different, you’ll see.”

In Milan, banner slogans read: “Against exploitation, racist laws and strife among poor people,” “To migrate is not a crime,””Our lives are worth more than their profit,” and “Berlusconi, hands off Albanian girls.” This referred to a Feb. 12 press conference, in which Prime Minister Silvio Berlusconi announced an agreement with Albanian Prime Minister Sali Berisha to stop illegal traffic of Albanians into Italy. Berlusconi joked that he’d make an exception for those who brought in beautiful girls.

One after another, people climbed upon a small stage to speak through a loud speaker: An Italian Jewish student spoke eloquently against racism. An Italian school teacher lamented Milan’s recent decision to limit the number of foreign children allowed in a class to 30 percent. A man from Ecuador demanded the right of residents to vote. Someone else demanded the right of any taxpayer to decent housing and schools. An young African woman said she wanted people to treat her with respect. An Argentine man said that his children were born here and should have citizenship. “We’re not going away. This is our home too.”

According to a report by the Province of Milan, as of September, 2008, there were 422,000 immigrants, including clandestine workers, in Milan province alone. That’s three times more that in 2005.

A European Union report revealed that, between 2002 and 2006 the number of Illegal immigrants doubled. This coincides with Berlusconi’s center-right government, which has made it increasingly difficult to obtain and to keep legal status.

The morning of March 1, I met more foreigners on the way home from the demonstration that I did in Piazza alla Scala. They were working in their shops, hurrying along the streets, peddling toys, trinkets, umbrellas and clothing made in third world countries. On the subway, a Romanian violinist played a Bach cantata.

I hope Nelly is right, that next year, on March 1, they will all be wearing yellow.