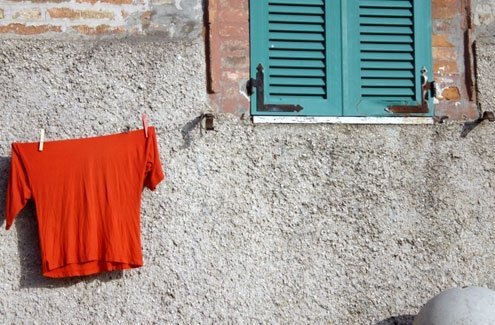 Stendipanni are a Rome staple.
W

e live in close quarters in Rome, a city whose living rooms are its streets. After years in the hills of Los Angeles — a city that isn’t really a city and lacks a center — we put our snail-like sense of privacy behind us (as well as deer, quail and doves) and moved to a Rome quartiere where no one is ever alone. Each morning, our Rome neighbors throw open the persiane to peer at us through their five-foot tall windows as we sip coffee and plan our day. It doesn’t help that the building was once a scuderia, a stable.

A very clever young man just made one-room apartment below us, sealing off what was once a small alley by putting up garage doors at each end, seemingly overnight. (Was it once a street? Did it have a name? Did the transformation happen on a Sunday? Were payoffs involved? Questions without answers.) The new arrangement blocks mopeds, Smart cars and cagey drivers poking around for shortcuts. The alley basically vanished.

Now it’s his patio, which happens to be located below our kitchen and living room. The new occupant is unhappy because his upstairs neighbors have one of Rome’s great luxuries: a clothesline. I can understand if he’s less than thrilled at living with our sheets and towels — even if they are French La Jallas. Or that he might dislike Hom underpants (imagine if I wore Texas, titty-pink bra; I don’t). Looking up at drying tile rags isn’t inspiring.

At the same time, nothing is more Italian than hanging laundry? It’s saves energy costs (astronomical) is ecological (what could be greener?), and among the reasons I live in Europe. No dryers here; no Maytag top-of-the-line Super Loaders (well, my stepdaughter has them, but she also has four children and a Labrador, reasons enough for any kind of time-saving appliance); no trash compactors (though my husband anoints himself “The Great Compactor” every time he takes out the garbage; no squeeze-out sponge mops; no self-cleaning ovens. In their place are people used to living in tight spaces for whom laundry lines is the norm.

Take the elderly woman who lives across from our living room window — the very tall window through which we gaze at Campo de’ Fiori’s delights, including the alimentari, Ruggieri, and the baker, Roscioli. This woman, who sings with a booming voice, makes it a point to add color to our meals. She hangs enormous red undies, well-worn dishtowels and the aforementioned-style bras on the line we see from our kitchen. My guess is that if any of these items fell on passersby they’d be instantly suffocated.

Still, I love her ever-changing rainbow. Seeing the laundry blow in the evening breeze or drip after a rain shower (she often forgets to pull it in before the deluge) is part of my dining ritual.

So why does the alley man take offense, demanding that we use folding laundry racks? After all, we were here first. And indoor stendipanni (clothes racks) inevitably rust and pinch your fingers when you try to fold them. “You have a terrace,” he explains.

Even Romans can turn yuppie-like (per bene), embracing an affluence that disparages laundry lines. I shudder to think what would happen to our new neighbor if he asked the elderly singing lady to remove her laundry — which hangs over a street, not an alley. She’d probably go into a tirade he wouldn’t survive.

On street-sweeping day, the singing lady can become hysterical. She rages at the poor sweepers for missing some of the cigarette butts nestled tightly between cobblestones (nonexistent zoning laws allowed a wine bar to open below her window).

I occasionally try to tell weary sweepers that she means no harm. Her ranting energizes her day. She can as easily praise my terrace-cleaning (“Brava, brava, che bellezza“) as call the sweepers idiots and pigs (“Porca miseria, voi siete stronzi, cretini, I maiale non vivono qui, qui viviamo noi!”).

Despite her ranting, we greet her with a smile. We ask her to sing for us, and she tells us that her mother was a famous singer, which may or may not be true.

Not hearing her voice puts a glitch in my day. I worry about her. Nearby Via Arenula generates the sounds of motorbikes, sirens, and the powdery noises of passing trams. Something about theses sounds suggests mortality.

So when I don’t hear her I make a little pilgrimage to the terrace, just to make sure she’s still singing, or preparing a rage. Her moods are part of the neighborhood. Plus, we need her laundry.