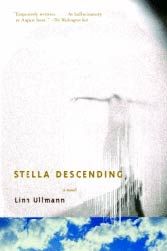 By Linn Ullmann, translated from the Norwegian by Barbara Haveland

Early in Ullmann’s brooding novel, a Norwegian police detective named Corinne recalls a starcrossed love affair between actors in the Ibsen play “When We Dead Awaken.” Smitten by the actress who plays Irene, the male lead leaps to his death from an Oslo roof in 1934 — “When we dead awaken,” Irene says in the play, “We find that we have never lived.”

In the present day, Corinne probes the death of Stella, another casualty of an Oslo fall. Did her husband of 10 years (Martin) push her? Was Stella pregnant? One witness, a man, says the two embraced on the abyss; another, a woman, says she saw a push.

But memory is shaded and shaky. Stella is an Ibsen-inspired creation, a nurse who cares for the terminally ill: She’s insecure, stinks of longing, lives on the edge. Martin is a nightmare-haunted furniture salesman (whose grandfather attended the 1934 Ibsen performance). Amanda, Stella’s 15-year-old daughter by a first marriage, and Bee, her daughter with Martin (“this alien child,” Martin calls her), inhabit dream worlds.

Ambiguity is Ullmann’s loyal companion. Her characters are eccentric phantasms built from loss. She studies Stella’s life — literal and metaphysical —from shifting perspectives: there’s cop Corinne; an aging patient of Stella’s named Axel; Amanda; the perplexed witnesses; and Stella herself.

The pivotal question — did Martin murder his wife? — is sacrificed to a story about how estrangement can burrow in for the long haul. Ullmann wants to speak from the brink. And to do that you need someone beyond it.