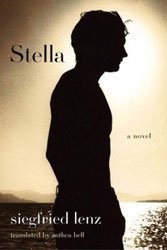 By Siegfried Lenz, translated from the German by Anthea Bell

The German title of this novella, “Schweigeminute,” literally “A Minute’s Silence,” seems more appropriate than its cornier American tease, “Stella,” which has the feel of overripe romance. That’s not inaccurate — this is, after all, about an 18-year-old who falls in love with his English teacher — but veteran German novelist Lenz isn’t out to jerk tears, at least not at first.

Instead, he sets out to chronicle how Christian, a high school class president in a Baltic Sea town, is swept away by Stella, his beautiful but aloof older instructor who swears by Orwell, Faulkner and revolutionary theory and lives with her aging father, a former Luftwaffe radio operator. The minute of silence matters since the narrative is in retrospect, opening with the a school gathering commemorating Stella’s death in a boating accident.

Lenz then weaves present-day grieving with the details of Christian’s largely immature infatuation. The novel’s upside is Christian’s man-boy confusion: He thinks he’s found a life partner in his cryptic teacher. The downside is Lenz’s failure to flesh out Stella, aside from introducing her sexual flesh, as well as his tendency to shift from Christian’s first-person storytelling to worshipful second-person observations: “You didn’t want me to leave your study…”

Translation may defeat some of Lenz’s nuance, but there’s no getting around a heavy-handed sentimentality that too often laps into the maudlin. Stella’s final note to smitten Christian, which he receives posthumously, reads: “Love, Christian, is a warm wave bearing us up.” Good soul Christian grieves, but Stella’s failure to make sense of warmth and waves (aside from being dashed by the latter) makes her unimaginable except in Christian’s first-love fantasy.