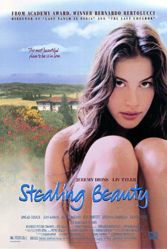 Hailed as Bernardo Bertolucci’s return to Italian soil after a prolonged American road trip (um, 20 years), this is a homage to the beauty of Tuscany and Liv Tyler. Lucy Harmon (Tyler) carries her lissome summer presence to a bucolic farmhouse to discover the identity of her father and lose her virginity. In the house are the usual Anglo archetypes, a sculptor named Ian (Donal McCann), his rustic wife Diana, an art dealer named Giullaume, and an entertainment lawyer Richard (D.W. Moffett, flawlessly pretentious).

Nineteen-year-old Lucy considers herself as a romantic (she reads her poetry aloud), so it’s no surprise that she eventually adopts wan gay playwright Alex (Jeremy Irons), who is dying of AIDS — adhering to the conceit that malady confers gravitas. So what happens? Not much. Ian sculpts, Diana complains, Richard muses, and Alex talks to Lucy about the fragility of passion. Novelist Susan Minot, who wrote the screenplay, confers pastoral indolence and measured babble set against a daubed background. If you like Tuscan postcards and middle-aged lust, Bernardo has it covered.