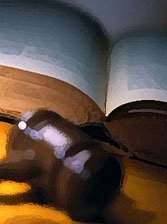 So, with a heavy sense of dread, I trudged along to the Questura...
W

ell, I suppose they had to catch up with me sooner or later. And after all, we are talking about a really dreadful crime here. When the letter arrived inviting me — inviting me, mind you, no rough stuff here in Spoleto — to the police station, I realized that the game was up. I decided to come quietly. There was little point in trying to do a runner. After all, the evidence was scrunched up somewhere at the bottom of my bag, along with broken pens, children’s sweet papers and old bank slips.

My permesso di soggiorno had expired, in um, 1996.

Yes, I do realize that’s quite a long time ago now. But you see — I know this sounds foolish — I didn’t really think I needed one any more. I mean, I’ve lived here for almost 20 years; I’m married to an Italian, my children are Italian (though British too, I’ll have you know). The European Union is just one big happy family, and growing by the minute, so why do I need a piece of paper with lots of official stamps on it to be allowed to live here?

Isn’t that supposed to be one of the few good things about the EU — a borderless Europe? You can come and live in my country and I can go and live in yours? All right, I’ll admit it, I just couldn’t be bothered to get the wretched thing renewed and to face those long lines at the questura, and all the traipsing around getting endless certificates in duplicate and triplicate. And quite frankly, I thought I’d get away with it. As I did, for many years, in good old wonderfully chaotic Rome, where there was little chance of anyone ever getting around to hunting down little me and my out-of-date permesso.

But I don’t live in Rome anymore. This is squeaky-clean Spoleto, where things actually work. Here the streets are spotless, the buses are never too full, and if you need a hospital appointment, you go to the nearest farmacia where they do it for you on the spot, using a computer. They even send you your blood test results by email. Incredible! But the downside to such extraordinary efficiency is that here there is no room to hide, and no place to run. They keep tabs on everyone.

So, with a heavy sense of dread, I trudged along to the Questura and prepared for the worst. A big fine for sure, expulsion, maybe. Images flooded into my head of me being bundled on to a plane in handcuffs, as my three children, holders of Italian passports, tearfully pleaded for me to be allowed to stay.

I was woken from my reverie by a not-too-gruff policeman. He didn’t seem at all interested in the fact that my permesso was eight years out of date. Better still, he didn’t even mention the word “fine.” This was going to be easier than I feared, I thought thankfully. Wrong! As he handed me over a form in a bored sort of way, he started scribbling some notes on it — all the paraphernalia I would need to present. To wit: four photographs, two copies of my passport. That’s fair. Two copies of my marriage certificate — where on earth is that, and what would happen if I wasn’t married? — and then, the sting in the tail, two copies of my cessione fabbricato.

I learned that this is a document from the owner of the property where you live. I asked if there wasn’t some easier way, one that wouldn’t involve so many pieces of paper. Well, came the answer, if you are the mother of Italian children, you could produce their birth certificates.

But they were born in England.

Forget it, I’ll get the first ones you asked for.

My head spinning, I reeled outside, cursing the day I ever decided to come and live here. Until a few uneasy thoughts began creeping into my mind: Like the time I lived in France and had to have a full medical examination and chest X-ray before they would give me a carte de sejour — in case I had TB, as the woman told me tartly. Or like the time I took my Italian boyfriend, now my husband, back to dear old Blighty for his first visit. As we drove through passport control at Dover, a customs officer looked him up and down with a sneer as though he had a bad smell under his nose. You can go, of course madam, he said in his clipped voice. But will the, er gentleman be staying long?