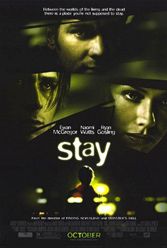 Style over substance, but what style! New York City psychotherapist Sam Foster (Ewen McGregor) gets the case of Harry Lethem (Ryan Gosling), a delusional art student who’s hell-bent on self-destruction. From the start, Sam senses that Harry’s case is unusual. Paranoid Harry, who announces his impending suicide, seems to have shaman status: Hail will fall from the clear blue sky, he says, and it does. Sam’s girlfriend Lila (Naomi Watts), an art teacher with a suicidal history, suddenly stops taking her medication. Increasingly, Sam can’t differentiate present from past and future. Nor does Harry’s family history make sense. Identity lapses and labyrinthine disorientation are piled one atop with one finger on the fast-forward button and another on reverse.

Director Marc Foster (“Monster’s Ball”) uses staccato jump cuts and zoom angles to blur the space-time continuum. Novelist David Benioff (“The 25th Hour”), who wrote the script, includes Freud, Dorian Grey, Lear, Greek legend, the Christ myth, and Gothic claustrophobia to scrawl too many things on a too-large canvas. “This is a dream,” Sam tells Harry at the end, “and the whole world is inside it.” Exactly. It’s the film’s hallucinogenic dreaminess, and not its narrative substance, that (like “Jacob’s Ladder”) make it ambitiously unconventional.