Stations of the trek 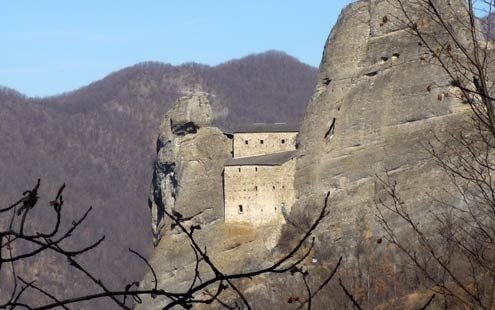 l Castello della Pietra is an impregnable stone castle wedged between two natural towers of puddingstone conglomerate rock. The Italian national monument is as impressive nowadays as it must have been when it was built in 1000 AD. Sitting atop Monte Cravi, it still guards the ancient Salt Road of the Val Vobbia, an Apennine mountain valley that includes Antola Regional Natural Park north of Genoa in the Liguria region near the borders of Piedmont, Lombardy and Emilia.

Marino and I have driven the A7 highway (Autostrada del Sole to Genova) from Milan to the Isola del Cantone exit. From there, we followed brown-colored (“of cultural interest”) signs to Castello della Pietra and Val Vobbia. We’ve just parked in the town of Vobbia.

It’s a bright, late February morning with a hint of spring. We walk back along the road and up to località Torre (490-meters), a group of houses just before Vobbia. Our aim is to hike the Sentiero Castellani, a gentle, up-and-down, two-hour trek along the castle-keepers’ path to the castle. The trail starts near a white house and a fast running stream, the Rio Cruz.

At the signboard, an elderly man with a cane and sunglasses approaches us. “You going to the castle?”

“Do I!” the man answers emphatically. “Worked many a job but as a teenager, I was a carbonaio.”

“Wow, a charcoal maker! Not many of you guys around nowadays.”

The trail is easy, he tells us. “There’s a fork little ways up, keep left or you’ll end up on Mt. Bricco. A Group got lost there last summer. Lady broke her foot couple weeks ago. Had to be rescued.”

With map, park itinerary (from the website) and cautions in hand, we head off.

“A historian of hiking disasters,” Marino says of the carbonaio, and we laugh. The town spreads out below us. Pockets of snow glisten in the warming sun.

We soon reach the first tappa, or stop, Il progetto. Once, a tower located here overlooked Vobbia and the river, with the tower-keepers communicating with the castle, using mirrors and smoke signals to send information up and down the valleys from Genoa to Val Scrivia and Tortona. Today the river is a silvery ribbon. An orange-red butterfly flits by. “Early for the season!” I comment.

The next tappa, La vegetazione rupestre is no. 8 (strangely out-of-order). It’s a dry, rocky area where crevices create microclimates for plants uncommon to other parts of the Ligurian Apennines. Wild thyme and orchids grow here.

Then comes Tappa 2, the stone ruins of a chestnut-drying hut called a secchereccio. A charcoal fire from underneath dried the chestnuts, which were an important staple in mountain communities.

No. 3 is Piazzola da carbone. Today we see burnt patches of flat ground where charcoal makers once toiled to build cone-shaped, two-meter-high, wood structures before covering them in clay in order to slow burn wood into charcoal.

Next come thicker woods. The valley narrows as we leave behind calcareous rock and head to no. 4. Here, conglomerate stone, a kind of sedimentary rock (less ancient and more fragile) creates an arid landscape. Towers of rock loom over gullies and drop-offs, offering a perfect habitat for falcons.

Stop 5 overlooks the canyon that the Vobbia River has sculpted on its way to the Scrivia torrent and valley. Yellow butterflies abound. A third of all the types found in Italy, 120 in all, enjoy the mix of mountain and sea air in this park.

At tappa 6, we descend into mixed woods of chestnuts, maples, oaks, hornbeams, and hazelnuts trees. Snow covers the trail. Two photographers with heavy cameras and tripods slip and slide up the path.

“No,” they reply. “Bucaneve [snowdrops, or galanthus]. We’re botany students from Genoa University.”

We cross a wooden bridge over the Rio Ronchetti stream. And there they are: Snowdrops! Millions of white flowers carpet the slopes. Clumps of yellow primroses dot the forest floor.

We ascend. We round a corner at the top a ridge and the castle rises up in the distance — stark, squat, stone balanced between two towering rocks. It’s a feat of medieval military architecture.

The trail descends to no. 7, a humid area of large and small fern species, including liquorice-scented polipodium volgare.

We climb again and near the castle. Arid, friable conglomerate rock dominates the zone. Plants, such as alpine sassafras, which is rare in the Apennines, grow in crevices. Unmarked, this could be another stop, no. 8.

We finally reach tappa 9, Il Castello della Pietra. Tortona bishops built the strategic fortress 1,000 years ago to guard the Road of the Imperial Fiefdoms and to control the valleys, from the Ligurian Sea to the interior Po River plains. Commonly known as the Salt Road (Via del Sale), the Imperial Road had many variants. While salt was the primary commodity, many products moved along the routes (just as pilgrims walked them). The Vobbia road linked Genoa to Vobbia, continued to Isola del Cantone and Val Scrivia, and then to the monasteries of Tortona.

Inhabited by families in a feudal lord’s employ, the castle changed hands numerous times. After the abolition of the Imperial Fiefdoms of Liguria in 1797, Napoleonic troops set the castle ablaze. Later, its five bronze cannons were melted to make the church bells in nearby Crocefieschi village. In 1979, the last owners bequeathed the castle to Vobbia. Genoa Province restored it.

Today, we picnic beneath its massive walls. Occasionally, the sound of muffled traffic far below breaks the silence. The castle stands guard. If only it could speak.

— You can find an English-language guide to the tappe of the Sentiero dei Castellani (Lords of the Castle) at parks.it. There’s also a 20-minute path to the castle from the provincial road that begin before Vobbia. The castle itself is open from Easter to October, or by appointment for groups