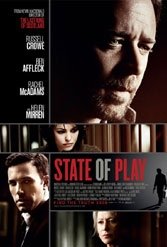 This clunky halls-of-Washington-politics political thriller is supposed to come with a message: New media (blogs and their makers) are charging into the space once occupied by diligent, Watergate-style gumshoe reporters. The Woodstein of 2008 is Cal McAffrey (Russell Crowe), a hardened old-boy pro who knows the city room ropes (“I’m a journalist, not a publicist”) A double-murder in fashionable Georgetown makes him suspicious, particularly since it gets to involving his college chum, now an up-and-coming congressman (an improbable liaison for a reporter). Said congressman, Stephen Collins (Ben Affleck), is investigating the growing influence of a homeland security contractor — a theme as worn out as terrorist cells. The shoe drops when, a. Collins’ lead researcher is killed, and b. Collins admits to bedroom romps with the dead woman.

Enter blog-reporter Della Frye (Rachel McAdam), who wants a piece of the prurience. Gradually, beautiful online hack and hardened newsboy make friends and break the Collins-cum-defense contractor hubris story. Helen Mirren is drafted to play a mordant Tina Brown-style editor, apparently to give the newsroom tension some punch. That’s a challenge since neither McAdam nor Crowe get the chance to emerge as believable, sympathetic characters. Only Affleck escapes caricature, mostly through a kind of dashing bravado.

Crowe’s best performances come when he commands the scenery (“Master and Commander,” say). Here, he’s a diligent cog. Howeither Cal or Della came to journalism is a mystery, so is the state of their skills. Scottish director Kevin Mcdonald (“The Last King of Scotland”) makes no effort to explain how blogging and news reporting differ, which would reveal the unlikelihood of the Cal-Della partnership. That’s a surprise, since screenwriter Tony Gilroy was deft with the details in “Michael Collins.” Even the hail-and-farewell-to-daily-newspaper closing scene hits a bump: The fictional Washington Globe is a broadsheet while the negatives shown on screen are tabloid-sized.