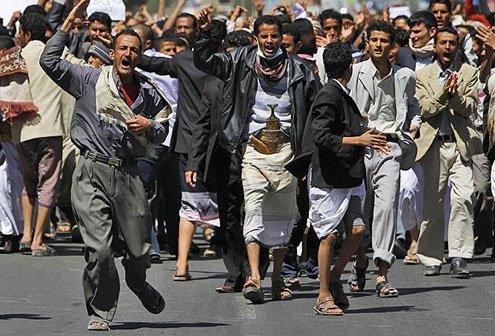 Yemen in the mix.
A

naïve and constricting vision of regional power permeates mass media and online chatter in response to Middle Eastern revolts and the refusal of brutal leadership cadres to capitulate either to the fervor of local uprisings or the hyperventilation of “world is watching” public opinion.

Anti-government riots have carpeted several Libyan cities, but unlike their Egypt counterparts the protestors have been counterpunched with ruthless firepower. Mercenaries have allegedly been summoned into mid-sized cities, shooting to kill and producing small-scale carnage. Libyan leader Muammar Qaddafi has been indignantly accused of waging war on his own citizens.

A similar denunciation was recently directed at the royal family of Bahrain, whose troops used live rounds to clear sit-in protestors, killing six. Bahrain is an ally of the United States and the European Union, which appeared to suggest that its leadership should play by more upright rules. It did not.

A key ingredient of political science is devil’s advocacy. Every story has two sides, however unsavory the second side may appear to those who yearn passionately for peacefully-achieved freedom and who assign profound honor to the aims of Middle East’s “mad as hell” disenchanted. In fact, those protestors may know less about their motives than they feel fulfilled simply by taking to the streets and hoping the outcome produces better than the devil they know

Yet heroism and yearning aren’t always what they seem, and they’re certainly not what Qaddafi sees, or chooses to. Quite the opposite, he has a tribal chieftain’s view of dissent as subversion and responds in kind. He has controlled his semi-feudal desert nation for 51 years — elevated to power with CIA assistance in 1969 — and cherishes the idea of continuing to broker political and economic affairs in the southern Mediterranean.

His authoritarian obligation, as he sees it, is to nip discontent in the bud, all the more so since his Egyptian rival Hosni Mubarak badly misread and mishandled his own revolt. Mubarak’s failure to immediately and forcibly suppress protests that were once controllable produced the signs of weakness that eventually cost him not only his own three-decade-old job, but also his regional reputation as a stalwart moderate.

Qaddafi is a far more primal figure who long ago lumped Mubarak among among the region’s patsies. If, as a common aphorism holds, one man’s terrorist is another’s freedom fighter, it also stands to reason that one man’s repression can be another’s survival of the fittest, particularly in territories where the grammar of governance is loose and unruly.

The leaders of nations that perpetuate the chasm between rich and poor, between powerful and disenfranchised, connect public outcries to the demonic spirits that democrats want instead to ennoble. Put-down clout is the power the only one they know, a notion the United States itself took to heart in its decade-long and often disingenuous regional response to the September 11 terrorist attacks.

But that response, fierce in its own high-tech way, was excused to the spreading of freedom. Or nation-building. Events lacking such neat billing often eluded mass attention or emotional investment, if they were mentioned at all. The gravity of Rwanda’s malice came to light after the fact. Ethiopia’s rarely-mentioned fight with Eritrea produced 100,000 dead between 1998 and 2000.

In long-ago 1982, Hafez al-Assad, the father of Syria’s current leader, sent troops to put down Islamic insurrections in the cities of Hama and Aleppo. That still-unrivaled display of Middle East strong-arming killed between 10,000 and 30,000.

Throughout the 1990s, the Algerian government and Islamists groups fought a war of attrition in which massacres were the measure of one-upmanship. Press attention was limited since neither the insurgents nor the government qualified as freedom fighters. Ethnic strife in the Sudanese province Darfur recently produced faddish empathy before falling from grace.

Urging restraint upon those who don’t know it, or who see their hold on power as imperiled, while styled as a righteous deed, is nonetheless based on cornerstones of nobility that many may share but few know to apply, or would themselves if imperiled.

Even pressure directed at scandal-ridden Italian Prime Minister Silvio Berlusconi to admit his shamelessness and resign presupposes a telltale vision of right and wrong to which many don’t adhere, or even recognize.

Mubarak, denounced as an ogre by opponents and consequently by the Western press, was a weakling by regional standards. The cathartic thrill generated by his ouster sent a message to rulers determined not to meet his fate. Namely, act swiftly, ruthlessly, lest crowds get the upper hand through television and networking, their suppressed rage doubled through death on the streets. It may be too late.

Middle class disdain for cruel autocrats is a predictable updating of Kipling’s 19-century “White Man’s Burden” and focused mostly in nations where everyone has air conditioning. But devil’s advocacy demands also remembering that these are high-stakes games being played out in badlands where those agitating for change, like their dictatorial enemies, are more familiar with rage than egalitarianism. Hardcore cunning, and force, are the only responses the two sides know well.

In such a scenario, survivors are easier to find than good guys, and even good guys often lack direction, let alone a moral compass. Calm after the storm is hard to envisage.