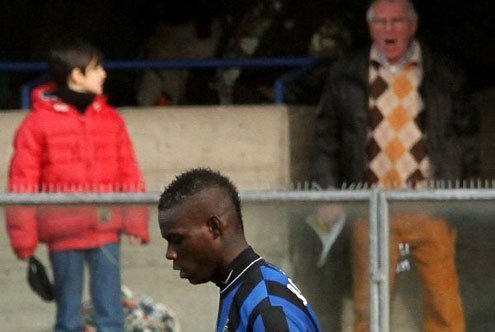 Balotelli: Italian by way of Ghana.
I

n Europe, matters of ethnicity and race overlap with sports. Italy is emblematic. It hosts both the bigoted Northern League, the country’s third-largest party, and Inter Milan, a strikingly diverse soccer team that will play against Bayern Munich of Germany in this month’s Champions League soccer final in Madrid.

Since its founding, the Northern League has repeatedly insulted Italy’s post-1989 tolerance toward immigration and made no secret of its disdain for blacks and gypsies. The party controls between eight-to-10 percent of the national electorate and has recently pressed to consolidate its gains [it already controls the all-important interior ministry].

Inter, meanwhile, is Milan’s second most decorated team (after AC Milan) and is the defending champion of Italy’s top division (Serie A). At the same time, the team’s composition runs strikingly counterclockwise to the prevailing northern social and political trends.

Coached by a Portuguese who doesn’t particularly like Italy, Inter’s starting roster contains players from eight nations, including four Brazilians (one also holds Italian citizenship), four Argentines, a Dutchman, a Macedonian, and a Cameroonian. On the bench are two Romanians, a Colombian, and a Kenyan.

The only three Italians are a reserve defender and goalkeeper, and the controversial black teen Italian Mauro Balotelli, born in Sicily to Ghanaian parents. In all, seven of the team’s lynchpin players are black.

“Inter is a great team,” Italian national soccer goal Marcello Lippi said recently, “but you can’t talk about Italian soccer… Italian soccer is made up of Italian players coached by Italians.”

In Lippi’s generation — he is 62 — soccer team identity deferred to a kind of national and ethnic protectionism. At the 1966 World Cup, Italy stunningly lost to a North Korean team whose players were portrayed in the local sports press and short and sloe-eyed.

Shocked, Italian soccer decided to shut its doors to all foreigners, blaming the presence naturalized stars — known as oriundi — at the club level for watering down Italian national bravura. The doors remained closer 14 years, until 1980, and even when it reopened, only one foreign player per team was allowed. In language, “a Korea” came to mean any unexpected national embarrassment at the hands of outsider. In 1982, when Italy played Cameroon in the World Cup, Cameroon’s players were jokingly called “the cannibals.”

Though multinational teams now flourish throughout open-door Europe, Inter’s role is unique: few club champions are as removed from, and contradict, local attitudes toward ethnicity, citizenship and race in a nation where the subject is fiercely debated.

The Inter paradox in fact creates a pitfall for the Northern League. League supporters and the team’s fans generally put aside potential bias toward the team’s ethnic and national makeup because allegiance to team is seen as superseding “political” concerns. Moreover, since the team’s foreign legionnaires are well-paid, legal, just-passing-through mercenaries, they can be excused from the heftier debate about clandestine immigration. Inter fans, meanwhile, despise arch-rival AC Milan, thus “the enemy of my enemy is my friend.”

Still, Italy struggles with a problem that France, Spain and Holland, exposed to both ends of colonialism, widely brought to heel years ago, though it occasionally dogs Eastern Europe, where multicultural society has yet to lay roots.

When Inter played Juventus of Turin earlier in the season, racist slogans and banners directed specifically at the mercurial Balotelli led to the stadium’s brief closing. Black and Italian, Balotelli’s mere existence appeared to cross an unspoken line.

The rest of Inter’s hired help has so far steered out of harm’s way. How to slur trespassers, Kenyan or Cameroonian, when they’re also possible glory-bringers?

At the same time, Inter struggles for the kind of undivided, devoted attention usually heaped on successful club teams. When Juventus of the 1980s and Milan of the 1990s scored major European triumphs, they were revered. Juventus’s great teams were identified through reassuring names such as Scirea, Tardelli, Rossi (and a French foreigner named Platini) while Maldini, Baresi, and Costacurta anchored Milan (notwithstanding the vital presence of three brilliant Dutchmen).

The Italian presence deflected anti-foreign lightening bolts. Inter has no such deflectors, which led to Lippi’s cutting remark. Worse still, its only Italian is black.

The Italian media has matured slightly. Cannibals have vanished. Overt slurring is less frequent. Yet God is in the details. More often than not, the Inter team set to play for the European title is referred to as “multicultural” Inter, which again demonstrates the Italian state of play.