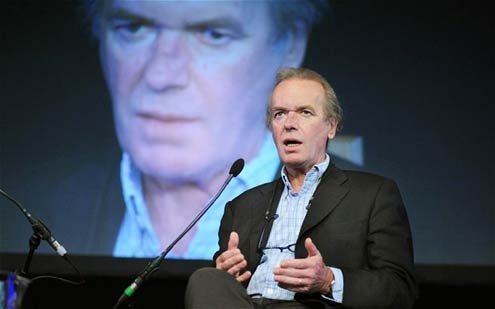 It'll be hard to beat Martin Amis's "Lionel Asbo" as the top British novel of 2012.
W

ho let the dogs in? Who? This ominous refrain is among the countless cliffhangers that help turn the pages of Martin Amis’s 13th novel, the extraordinary “Lionel Asbo” (Jonathan Cape). Subtitled “State of England,” it is a brilliantly conceived, exacerbating examination of Britain today.

In his long career, Amis has repeatedly decried his nation’s collapse into amorality and greed.

In this latest work, terrifying, mindless Lionel Asbo represents the current “state of England” traced through several years in the lives of violent Lionel, and his gently counterpointing young nephew Desmond Pepperdine. They live together in a 33-story block of council flats in Diston Town. It is a fictive London borough, a Dickensian underbelly of the larger “world city,” and viscid viral carrier of the nation’s every “dis” function.

We’re terrified of Lionel, and frightened for Desi. Who has only this “anti-father” as guide through the dark woods of growing into manhood.

Lionel is “brutally generic… the slablike body, the full lump of the face… out in the great world city there were hundreds of thousands like Lionel.” At age three Li tried to set fire to a pet store. And earned a restraining order in the ASBO category: Anti-Social Behavior Order. At 18, Lionel Pepperdine realized the social workers got it right, and changed his name to Asbo.

He exploits his “Dis” function sector, and its raw market of supply and demand. But being “on the debit side” in intelligence, and given to uncontrolled rage, his gains are deeply cut by the fact that he spends half his life in prison. Still… the world city’s familiar business models are instructive: “You does what you has to.”

Aside from wreckage, beating up women (“sex is only good with pain”) and murder, his work includes loosing the psychopathic pit bulls he keeps on the flat’s balcony. They consume six-packs of beer and stomach-roiling quantities of Tabasco, to keep them “ready.” For? That running thread: “Who let the dogs in?”

As the narrative begins its arc toward 2012, Desmond, then 15, is living with his 21-year-old criminal uncle. Both are striving in their separate ways to construct a survival scenario. Des acts as Lionel’s flip side. His unsentimental honesty and simple, poignant hope give this fiction its saving and moving human warmth.

He attends Squeers Grammar school, “England’s worst.” Born a half-black bastard, he dreams at night of a ladder leading away from horrific Lionel and Diston. To “some kind” of peace and harmony. How easily this befuddled innocent will follow his Granny’s tender cuddles into her bed. Until he imagines Lionel learning his own mum’s “a fucking aped.” When and if Lionel might get this info is another question that pace Des, and the reader, toward the final chapter.

But don’t read this only for its eviscerating satire or the fast, episodic tale. The writing itself is agile, vital, elastic, a whirly language spin-off.

It’s all accomplished by a trick of fate: during one of his frequent City prison stints, Uncle Lionel wins £139,999,999.50 in the National Lottery. And catapults into fame, and into the middle and upper classes of the great metropolis. He, and his still impoverished, but closely observing nephew, will learn a lot about the affluent otherworld.

Seems that money is a social leveler there. When London journalists dub Lionel the “Lotto Lout,” he calls in PR advisors, financial consultants, and “rented” society connections. For a while, everything is smooth as ice. Until Lionel wrecks his new address (The Grand Palace Hotel). Moving to a private, country mansion, he’s accompanied by fake mistress and ambitious poet Threnody. As she exploits Lionel’s “fame” to leverage her career, Amis enjoys a mean sideswipe at the lit celeb club.

In his continued, hectic and devastating London adventures, what will Lionel finally learn about British society and its relation to money and notoriety?

With Lionel in London — now free of his threatening presence in the flat — can Desmond escape the Distonic nightmare, and find a private brand of peace and happiness?

Lots of plot-movers, superbly mastered prose, and a triumph of grotesquely LOL satire. By an author whose human sympathies still remain alive and well. It’ll be hard to beat “Lionel Asbo” as 2012’s top British novel.