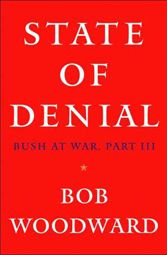 Despite the title, Bush is hardly the protagonist. A titular head, inconsequential and unflaggingly chipper, he seldom appears and even more rarely acts as a leader. Center stage feverishly micromanaging details but equally incapable of decisiveness is Donald Rumsfeld. Lacking both know-how and policy, he browbeats underlings, dismisses unwelcome reports, and sidesteps the State Department, the Pentagon, and the CIA, all of which he distrusts.

Here the theme is Iraq, but the focus is Washington, D.C., where the war itself gets lost in the battle of mighty egos. Woodward’s tale of political infighting, media manipulation, bureaucratic inertia, and outright incompetence are matched in shock value only by his portrayal of an administration so obsessed with approval ratings that even the timing of Iraqi elections was chosen solely to maximize impact on American voters. A truly disturbing work.