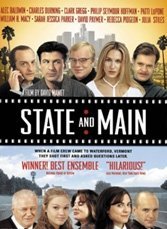 A film troupe invades a rural Maine town, wreaking modest, culture-clash havoc. This is Mamet that’s not really Mamet-like. That’s mostly because the material doesn’t leave much playroom— aside from wide-eyed town and bored stars.

Mamet tries merging small-town parody (think “The Andy Griffin Show”) with ensemble Hollywood satire but emerges mostly with one-liners as in, “If your memory was as long as your dick, you’d be in good shape.” Still, with a cast that also includes Rebecca Pidgeon, Charles Durning, and Patti LuPone the movie’s IQ is sweet and high.