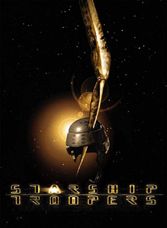 At times, this is like a “join now” newsreel with giant insects substituted for Nazi or Communist tanks — which is what Robert Heinlein had in mind 40 years ago, up to a point. Director Paul Verhoeven’s effects-laden art deco fantasy about pumped-up Earthlings pitted against a planet of heathen insects would be downright silly if the insects weren’t so ingeniously conceived. The gory slivers aside, the sneaky subplot is about young men and women dressed in black and primed for heroic (and viciously brutal) action on behalf of an obviously militaristic state. In a parody of one-upmanship, the insects are a determined brood: the perfect enemy. Which means the state must be disciplined and vigilant. War is lose-the-girl hell. No Bugs in Iraq, though. And no insecticide. Very clever.