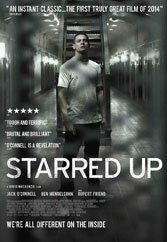 “Starred up” is the British term for the transfer of an unruly youth offender to from juvenile detention to an adult prison. That benign definition seems insufficient to suit the tone of Scotsman David Mackenzie’s ferociously sensitive prison drama. Jack O’Connell is Eric Love, the nothing-to-lose youth offender, an abused foster child and murderer whose violent instincts are both uncontainable and mischievous. He’s vicious man-child with a grin. Little about his penchant for havoc changes among adults. Within a day he’s in solitary, having tyrannized fellow prisoners and guards alike.

Until an older prisoner Neville Love (Ben Mendelsohn) — his estranged father, stunningly — tries to bring him under control (“Play by the fucking rules or bounce…”). Shifting between a small counseling group (whose black-white racial dynamics are a storyline unto themselves) and prison wing power brokers, Eric is educated into corruptly mainstream prison life — his safety, if safety even exists, is watched over by his stormy father.

Anger management is a popular 21st-century theme, but here little is either managed or manageable, with each inmate an incendiary bomb. As Eric gradually begins to get a tenuous grip, father-son tensions bubble over. Almost needless to say, happy endings have no place in a prison package, and there’s none here. That matters little. What does is the portrayal of animal rage and father-son reconciliation in feral tandem. The humiliating magnificence of the whole — with O’Connell putting on the performance of a young lifetime — is something very rare indeed.

The film, assuredly written by Jonathan Asser, is based on Asser’s own experiences as a volunteer prison therapist. The film itself was shot in two infamous former prisons, Maze and Crumlin Road, both in Northern Ireland.