Staring at the Sun 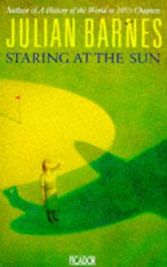 This starts promisingly enough, with fighter pilot Thomas Prosser seeing the sun rise twice one morning in 1941. It’s a trick of time and altitude. But Prosser is also a trick. He yields the novel to Jean Serjeant, whose life and loves we follow for nearly a century. Her son, Gregory, a Prosser connection, grows mature and old beside her.

Through the two characters, Barnes asks life’s Big Questions, as well as dozens of tediously minor ones. He’s also trying to write a female book, with Gregory asking a computer about God (the computer is called TAT, The Absolute Truth) and Jean spending ruminative years in China.

By the time Jean turns 99, the novel has collapsed on itself. It’s a now-dated forerunner to Martin Amis’ jaw-dropping “Time’s Arrow,” which better turned conventional chronology on end.