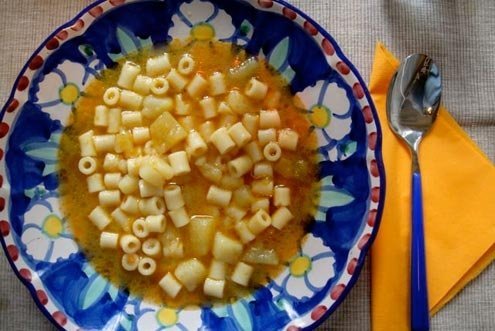 hilly weather is the Italian invitation for starch-dependent menus. Though they’re consumed with abandon year-round, winter gives carbs an even bigger welcome mat. Some pasta dishes are particularly well suited to the colder months, most not necessarily dependent on seasonal ingredients. They include hearty grain and vegetable soups, richly dressed ragùs, and the best of all gourmet comfort foods, risotto.

Here are three of my favorite stalwart winter primi piatti, with a little bit of history and recipes.

Pasta with potatoes is a thick and hearty Neapolitan soup. It’s normally made with mismatched, oddly shaped pasta, once sold cheaply by weight, or simply made up of odd broken pieces of various different shapes of leftover pasta.

Traditionally, the condiments are cooked first, creating a flavor base. The pasta is then thrown in and cooked along with all the other ingredients. This allows the pasta retain precious starches it would lose if cooked separately in salty water and then drained. The process adds flavor and texture to the taste of the soup. It’s so-called cucina povera, Italian poor man’s cuisine, at its tastiest:

— Sauté the onion and garlic in a large stewpot equipped with a tight fitting lid. When onion and garlic begin to tan, add the minced celery. Simmer lightly, and season with salt and pepper to taste.

— Pour in 2 ladles of stock and add the cubed potatoes. Gently cook over mild heat, bearing in mind the potatoes mustn’t become mush.

— Add the raw pasta to the pot, and cook as you would risotto, ladling broth a little at a time, as it absorbs. Too much stock will make your soup too liquid, too little will result in a soggy mess. Keep hearty Italian minestrone as a texture model.

— When the pasta is cooked through (no need to keep al dente standards for this dish), crank up the heat and toss in the diced cheese, stirring constantly. Cover and let the cheese melt and form long springy ribbons.

— One last turn of the pepper mill and devour in front of the fireplace.

Extracted from the stamen of a crocus flower, saffron is required in huge numbers of blossoms to produce a small quantity of the dried stigmas used for the spice. The plucking and the separating of the petals is all done by hand.

Fragrant zafferano is native to Abruzzo (Italy’s major saffron grower) but oddly enough isn’t a commonplace in the region’s local cuisine. Instead, it’s particular to the classic yellow creamy risotto typical of Milan — which also happens to be the textbook accompaniment to wintery ossobuco, a rich and succulent veal shank stewed in wine with vegetables and seasonings, and whose prized morsel is the marrowbone.

Preparing good risotto is a lot like riding a bike: it takes commitment and practice to begin with, and just a little bit of concentration after that. Mantecato means buttery, and this risotto depends on it. If you follow these instructions stress-free, making risotto can be a soothing, Zen exercise. Sip the wine and let the stirring motion and fumes rising from the pot relax you.

— Sauté the scallion in half the butter until it begins to tan, and add the wine. Cook over low heat until the wine has fully evaporated and the scallion is translucent.

— Add the rice and the saffron, mix well with repetitive circular motions, and begin adding broth (one ladle-full at a time as the broth is absorbed by the cooking grains), stirring gently all the while.

— When the rice has almost completely reached the al dente stage, reduce the heat and stir in the remaining butter and the cheese, cooking a minute or two more.

— Dot the surface with a few flecks of butter, and let the risotto rest covered for a minute.

— Stir briefly and prepare for pleasure.

Not something you’d make in the middle of August, this quintessential Rome dish is made with guanciale (pork jowl), pecorino, pepper and no, not heavy cream, but rather raw eggs and a ladle of pasta cooking water for creaminess. How to properly blend all these in the bowl makes the difference between good carbonara and awful. The “Carbonari” were 19th-century freedom fighters with patriotic and liberal goals who played an important role in Italy’s unifying Risorgimento.

Some believe that the dish was once popular with these fugitives who lived in the mountains surrounding Rome, because the ingredients were easily portable and cooking was fairly uncomplicated. Others suggest World War II GIs really invented it, trying to recreate a bacon and eggs breakfast for lunch (my view of that legend: preposterous.)

Here’s how to the Romans make it.

— Film a large skillet with 3 tbsp of olive oil, and heat. Add the guanciale and sizzle for about 10 minutes over a low flame, until the fat is translucent, crisp and barely browned. Remove from the stove and set aside.

— In a large serving bowl, whisk the eggs, grated cheeses and season with pepper. Blend well into a creamy and fluffy mixture.

— Bring a gallon of salted water to a rolling boil. Cook the pasta until al dente, reserving 2 cups of starchy cooking water.

This is where it gets tricky.

— Drain the pasta, and immediately toss it into the skillet with the guanciale and its drippings to coat well, but only about a minute. Empty the slippery pasta and porky goodness into the bowl with the egg and cheese mixture, and blend vigorously. Do this with quick, firm movements, because you don’t want the eggs to set with the heat of the pasta into a disastrous frittata, rather to evenly coat and smoothly cook soft. Pour in a slug of pasta cooking water (about 1/4 cup) and keep blending the silky delight. Taste and adjust seasoning with more Pecorino and black pepper, if necessary.