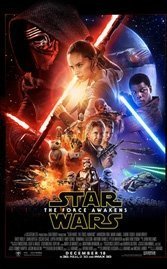 If you’re over age 10 a single word suffices to make sense of the latest “Star Wars” installment: Disney. The multinational fantasy factory’s first foray into George Lucas land (for which it paid $4 billion) is a cheery enough piece of pyrotechnics designed appeal to preteen audience while decorated with enough long-in-the-tooth veterans (Harrison Ford, Carrie Fisher, Mark Hamill and ageless Wookiee Chewbacca) to tickle the fancy of the late middle-aged Boomers who once waited for hours on American asphalt to see a sleeper movie that caught everyone surprise.

But the film itself is a half-ironic rehash, its hyper-drive action and light sabers-away combat scenes kicking in so fast and hard there’s little time for these newer comic book creations to establish much of a personal protocol, let alone a history.

The Dark Side is now the First Order, with Ridley’s button-faced Rey drawn into to the stellar fracas after a roly-poly droid (BB-8) with secrets suddenly tumbles in her possession. Same with kind-hearted Finn, dumped into the narrative after defecting from Ren’s troopers as they savage a planet. After that, the Force and the Dark Side do battle in the spirit of 1977 original.

Spicing up the clashes is the return Han Solo (Ford), Princess (now General) Leia (Fisher), Luke Skywalker (Hamill), R2-D2, and C-3PO in what amounts to a grandly retroactive homage to trillion-dollar franchise. Yet homage rarely breaks new ground. Lucas’ greatest gift in those far, far away days of the 1970s was taking Saturday matinee space travel fare, spiking it with incipient digital technology, and adding some fabulous Dr. Seuss-like creations. The original, an unexpected summer hit, was basically child’s play with enough maturity to conquer even those usually resistant to sci-fi and fantasy.

Here, Disney tugs repeatedly at nostalgia’s cape, good for box office revenue but useless to intelligent innovation, leaving Abrams with a task tantamount to a sequel to the “Wizard of Oz,” only this time with Dorothy and the Cowardly Lion at 70. It’s sentimental and cute — as are Rey and Finn — but cuteness is not an inspirational tool, and for all its galaxy-zooming beauty, inspiration what Disney’s first “Star Wars” lacks.