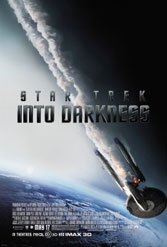 Most important, though, is the continuation of the uncanny retro-chemistry between Chris Pine as Capt. James T. Kirk and Zachary Quinto as (ever-more-feeling) Mr. Spock. Here, the dynamic duo suffers an early reversal, only be rehabilitated and placed on the trail of famous bad guy Khan (Benedict Cumberbatch). But good vs. bad also includes internal betrayals, which gives the story line its accelerants. Khan is enemy, ally, and then enemy again, in “the enemy of my enemy is my friend” vein, and the scowling Cumberbatch brings gusto to the raging.

The rest — and unlike 2009’s “Star Trek” there’s not much in terms of narrative — is Warp speed, Bones and Scotty one-liners, and fleeting if adoring looks at Kirk from a blonde weapons experts (Alice Eve), whose father is a turncoat admiral. Amid the jousting, the ever-slicker USS Enterprise is bruised, battered (even tail-spinning), but never beaten. Hackneyed it is, by rote, because for Abrams every day is Saturday and Saturday a time for silly romps in space where the free and the brave win every time. And no one really dies, especially not our hero Jim Kirk.