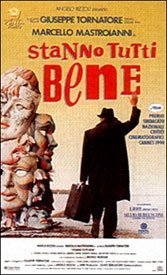 If you like moments of understated grace, here’s one. A grandfather visiting an his children is put in charge of an infant grandchild who stops sobbing only so long as he’s in front of TV. But reception fails and the despairing grandfather can’t calm the child down, until he parks it in front of the front-panel washing machine. To an infant, it’s all about color in motion.

That Marcello Mastroianni plays the relieved grandfather helps enormously. Toward the end of his career Mastroianni project an empathetic melancholy that director Giuseppe Tornatore uses as butter. Mastroianni is aptly-named Mateo Scuro (scuro means dark), a retired Sicilian bureaucrat who heads north by train to check up on his scattered children, hoping to bring home a report card on their progress to his wife, who is dead.

No one of course is really bene, any more than life is dolce in “La Dola Vita” — irony’s the handgun.

For Scuro, modern life is bewildering, depressing, amazing. Scuro’s children are harried but stalled. His sons are underlings, his daughter is an underwear model. Marriages tremble. Mastroianni’s ever-curious Scuro is an interloper in a world whose doors are wide open to vulgar TV and adulthood without purpose.

Tornatore made the film about the time that national bribery scandals brought down the country’s leading parties, seeming to open the door to a more hopeful future. But as always with Tornatore, the realities of urban life contradict deeper satisfaction, leaving only pretty scenery in a country short on a collective future.