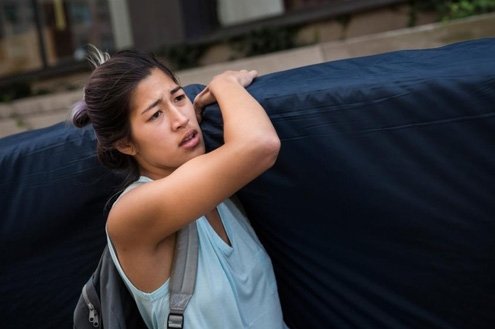 Former Columbia student Emma Sulkowicz claimed she'd been raped by fellow student in 2012, but that the university failed to take her seriously. Her mattress protest followed.
I

mages of people expressing public resistance to authority often stand the test of time. Consider the photo of a Chinese man blocking a tank the day after the Tiananmen Square massacre in 1989.

Giordano Bruno, a Dominican monk with a scientific bent, was burned alive in Rome’s Piazza Campo de’ Fiori on February 17, 1600 after being convicted of propagating beliefs that undermined Catholic Church dogma. He questioned whether Christ was fully divine and whether the earth was the center of the universe.

A skilled orator, Bruno’s fate was sealed when he refused to recant his controversial theories to officers of the Roman Inquisition. Inquisition members were so concerned about muting Bruno’s dying words that he was actually muzzled when tied to the stake. A dark and brooding statue of Bruno is now the Campo de’ Fiori centerpiece.

The statue’s ominous presence acts as a magnet as well as a commanding backdrop for protesters demonstrating against those who would limit free speech. For them, the outspoken Bruno remains a symbol of those who have refused to bend to authority even in times of adversity.

There is a modern-day Bruno parallel in the case of Emma Sulcowicz. Art student Sulcowicz, who recently graduated from Columbia University, told university officials she’d been raped by a fellow student in 2012, her sophomore year. But the university ruled that the alleged rapist, Paul Nungesser, was “not responsible,” effectively clearing him. Enraged by what she saw as poor adjudicating procedures, Sulcowicz devised a response via performance art. In August 2014, she began a carrying a 50-pound mattress wherever she went on the Columbia campus to keep memories of the incident alive and protest the university’s lax sexual assault policies.

Sulcowicz called the piece “Mattress Performance (Carry That Weight)” and announced she’d haul the mattress (on which she claims she was raped) around campus until either Nungesser left the New York City school or she graduated. Nungesser stayed on and Sulcowicz kept her word.

Sulcowicz isn’t the first person to tackle the issue of campus rape through performance art. But the traveling mattress was a particularly affecting image. It quickly became a national lightening rod for powerful, hot button issues such as sexual harassment, sexual discrimination, free speech and privacy.

In Italy, sexual harassment and rape are criminal offenses, while the United States handles them at both the civil and criminal levels. Title IX of the Educational Amendment Act of 1972 prohibits sexual discrimination in educational institutions. It is applied when sexual assault appears to prevent victims from taking full advantage of their education.

Nungesser, not Sulcowicz, used the law in a recent lawsuit filed against Columbia and visual artist Jon Kessler, a professor from whom Sulcowicz sought guidance regarding her mattress project.

Nungesser’s principle claim is that support of the performance piece by the university and Kessler thwarted his educational enjoyment. By encouraging Sulcowicz’s performance, the suit reads, Kessler “publicly endorsed Nungesser’s harassment and defamation.” Kessler vehemently denies the claim, insisting he advised her in the same way he does all his students, academically.

Courts will decide whether Kessler encouraged Sulcowicz and whether Columbia should have intervened to shut down the display. But whatever they rule, the many pictures and videos of Sulcowicz’s mattress resistance are unlikely to go away soon. She forced the issue into the open by refusing to waver. The mattress performance was planned, executed and maintained as promised.

In January, New York Sen. Kristin Gilibrand made Sulcowicz her guest at the President Barack Obama’s State of the Union address in Washington, saying she hoped her presence would “shine a national spotlight on the need to flip the incentives that currently reward colleges for sweeping sexual assaults under the rug.” Since then, Gilibrand has praised a number of students locked in sexual harassment cases for their “boldness [and] ability to stand up, courageously speaking truth to power.”

Universities are beginning to respond. New York has seen a flurry of legislative activity. Gov. Andrew Cuomo, the State University of New York (SUNY), the American Law Institute (ALI) and the New York Civil Liberty Union are all weighing in on drafts of new laws, both criminal and civil.

Rape is difficult to prosecute effectively and fairly. But the time has come to concentrate the debate and ensure the discourse produces practical results. What side you’re on matters less than the fact that Emma Sulcowicz and her mattress created indelible images. The kind that can make history.