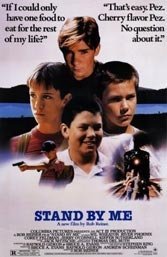 Rob Reiner’s gentle rite-of-passage movie, based on a considerably harsher Stephen King novella, is set in late 1950s Oregon and makes a mint from the strengths of its four young leads, with the late River Phoenix standing out as their anchor. It’s Labor Day 1959 in the fiction hamlet of Castle Rock when young Gordie Lachance, a writer to be, reads about a missing boy in a newspaper article and decides to assemble his friends together in a who-needs-parents hunt.

The backdrop comes from adult narrator Lachance (Richard Dreyfuss), whose introduction opens the door to the bonding saga of Gordie (Wil Wheaton), Chris (Phoenix), Vern (Jerry O’Connell), Terry (Corey Feldman) and Denny Lachance (John Cusack). The “body” hunt lets gives the preteens a chance to march, smoke, complain about parental malfunction, insult each others’ penis’ and generally use the hinterlands to grow up. The journey, no surprise, gets assist from The Chordettes, Buddy Holly, Jerry Lee Lewis, and so on.

You know what the story is about from the start. You also know that no one except insecure Gordie, the mocked writer (encouraged by delinquent Chris), ever amounts to much in life. Reiner’s intention isn’t so much to proselytize about the ups and downs of the American Dream as identify and color an indelible point in time, and how adolescents lived it, and he does this with compassion and flair.

The famous Ben E. King song underlies the story and is anything but sinister. Yes, a body is found, and in a way the boys never recover their halcyon boyhood, but that’s not the point: What is that boys will be boys, once and forever. This was actor-director Reiner’s breakthrough and also marked Canadian Kiefer Sutherland’s first American film appearance.