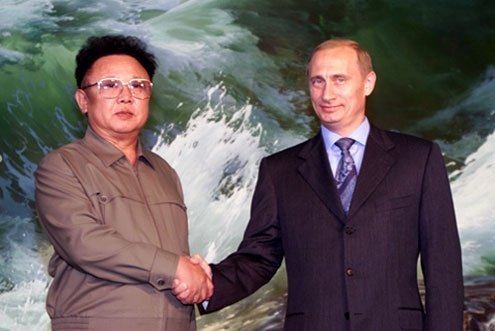 ometimes North Korea seems like the outgrowth of an Asian Merlin’s eccentric dream, a comic book nation of the kind 19th century satirists populated with grotesque leaders and suffixed with “-stan.”

From a distance, it deliberately resists postmodern casualness in favor of a cruelly goofy, slapstick militarism that lost most of its Western credibility between the end of World War II and communism’s collapse.

Only a nation isolated from civic fruition (or in absurdity’s thrall) would launch seven Scud missiles on the eve of American Independence Day — rockets for rockets sake. Saddam Hussein went on a Scud kick in 1991, but in the context of a losing war.

Kim Jong-il’s North Korea wars only with itself, worrying that diminished paranoia might undercut a two-generation personality cult. In the “Dear Leader” sweepstakes, Kim loosely follows in his father’s footsteps and probably ranks a close second to Albania’s latest Enver Hoxha, once the paranoid king of the Balkans. Kim, who is believed to have suffered a series of strokes over the last year, is North Korea’s weather balloon. No wonder rocket hiccups have become the norm.

The military is at the center of all dictatorships, its bedecked leaders divided into divisive, quarrelsome blocs, often by the supreme himself. When autocrats get sick or disengaged, subalterns can grow restless, emboldened, even panicky.

Nor are democracies immune. After a March 1981 assassination attempt on President Ronald Reagan, retired general and Secretary of State Alexander Haig went on TV to announce he was “in control,” a bizarre assertion that wasn’t his to make.

Who’s in charge in North Korea is anyone’s guess.

Since the end of the Korean War, North Korea has maintained active if limited ties only with one-time savior China. South Korea and Japan, both U.S. allies, now see it as a menacing example of outsized pride in an age otherwise marked by international cooperation. Japan, once anything but a good neighbor, now dislikes regional rogues.

Though it has more to lose, U.S.-protected South Korea is generally more patient toward the north’s conniptions. Seoul’s leaders sense a coming meltdown that will unite the Korean peninsula, an inevitability from the south’s perspective. Though North Korea has a vast standing army, it remains a poor and marginally efficient state that, like Iran, staves off irrelevance through nuclear flirting. Without short-range missiles and rumors of fission, North Korea rivals Ghana as a threat to world peace.

Its generals know this. They’re no strangers to NHK, Fox and CNN. Making others squirm is both method and goal. So is maneuvering for post-Kim power. Fireworks offset general inferiority.

Cults of personality, restrictive by nature, frequently push domestic arguments into the international arena, where differences are sharpened. If Kim’s successor is unclear, military preeminence is not. Preemptive force can also help remind a starvation-diet population that armed overlords control their future. Hoxha for example warned incessantly of an impending invasion and ordered pillboxes built along Albania’s coastline (begging the question what nation beside Italy would want Albania). His wariness became the nation’s degenerative disease.

Force is the national affirmation most suited to regimes (consider Moscow’s tank-spiced May Day parades). Egalitarian interaction makes autocrats all the more fond of triggers. Force is simpler proof of life.

Without the mechanisms of consensus, dictators and their coteries use fireworks to send signals. Kim, the man behind the curtain, or presumed to be behind it, is rarely seen. For that reason, the threat North Korea poses, or is seen to pose, approximates burlesque.

In “The Mouse That Roared,” a charmingly silly 1959 comedy about the way big and little nations get lost in notions of grandeur, the young Peter Sellers plays a general who leads the fictitious Duchy of Grand Fenwick into a (winning) war against the United States. He speaks a memorable line: “Remember, men. There is nothing wrong with surrendering to overwhelming powers, as long as it is done in a military manner.”