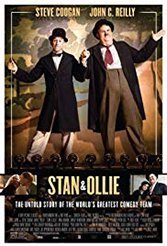 Films with a biographical slant are at their most poignant when the focus comes after the spotlight has faded. Bravo to director Jon Baird and scriptwriter Jeff Pope for recognizing that. They set their tender portrait of British-born Stan Laurel and Oliver Hardy, from tiny Harlem, Georgia, stars of the slapstick comedy era, in 1953, well after their brand of goofy, melancholy humor had been undone, in part by World War II’s incessant if not horrible realism. By the 1950s, radio and TV performers — Abbott and Costello, Jacky Gleason, among many — had swept aside traditional theatrical stand-up.

Here, Stan (John C. Reilly) and Ollie (Steve Coogan) are seen plying their trade on tour in mostly sparsely- ttended British venues. They’re the faded old-timers trying to keep old gags and mannerisms afloat. And sometimes they plainly fall flat, both to audiences and each other. The charm, naturally, is in the bond between the two men. Reilly’s life-loving Stan is both amazed and annoyed at Ollie’s perfectionist’s persistence. Coogan’s head-scratching, show-must-go-on Ollie is neatly situated between professionalism and resignation, since it’s clear he knows the duo is playing on borrowed time. A movie project of the tour is on the rocks (the project, dubbed “Robin Hood,” never came off) and age —comedy’s enemy —has already come knocking (the duo, both in their 60s, quit in 1955 after 28 years). Yet the show does go on, since decline tells its own story. Many acts split, but these two don’t know anything but their routines.

Shirley Henderson and Nina Arianda are both strong as Lucille and Ida, two wives who’ve seen it all yet remain loyal to husbands now stuck in twilight.

The comedy, old lines and new, has a bittersweet feel. Ollie: “I’ll miss us when we’re going.” Stan: “So will you.”

This is a film packed with affection for the long-gone days of theatrical comedy. Both leads shine. Scottish director Baird, whose last effort was the much-acclaimed noir “Filth” (2013), swaps black humor for tenderness, which he extends to all his players. The result is a nostalgia-drenched ode to pre-crude humor.