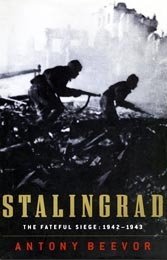 The details of the 1942 Battle of Stalingrad are unfathomable in 21st-century terms. Yes, war video games possess infinitely realistic graphics and documentaries have access to technology that make can make even the grotesque seem real. But the catch is in the word “seem.” What makes Stalingrad unique is that is was entirely real, and that human beings didn’t run from something which, on paper, dwarfs spiritual comprehension, namely two huge but battered armies — 3.5 million combatants — facing off for months in a high-stakes fight during a sub-zero Russian winter with death the most likely outcome.

British historian Antony Beevor’s account is a triumph of sweep, detail, with appropriate deference to the acres of built-in horror (total dead, missing or wounded on both sides after 21 weeks: 1.95 million). German troops, later decorated for their Russian Front duty, labeled the medals the “Order of the Frozen Flesh.” Russian troops, many trapped inside the ruined city, which Stalin refuse to yield lest all of Russia follow, thought of themselves as belonging to the “Stalingrad Academy of Street Fighting.”

It wasn’t merely the Soviet Red Army attempting to repulse weary Nazis but also megatons of internecine strife. The dreaded Soviet NKVD killed its own soldiers at the slightest whiff of dissent, which could include taking a break. The retreating Nazis, starved for material and simply starved, made bridges from their own corpses; nothing else was hard enough. At night, mice gnawed off frozen toes of sleeping soldiers.

At times, Hitler’s ill-fated 1941-42 Nazi push into Stalin’s fortress — codenamed Barbarossa — has grows epic enough to steal from literature, including Homer, Dante and most known science fiction. Beevor deflects the sentimental by opting for a laconic approach mostly bereft of deep sighs and dark amazement. He locks arms with the horror while letting numerals, details and decisions speak for themselves.

“Dead men are no longer interested in military history,” one German general, weary of the holdout, objects to the Berlin high command, to little avail. But Beevor’s most salient political observation is a simpler one: “The invasion of the Soviet Union had forced the Russians to defend Stalinism,” by which he means the no-lose battle was not only one fought for a country but also for a system. It was a victory that endured 50 years and helped create legends around which even today’s Russia still rallies.