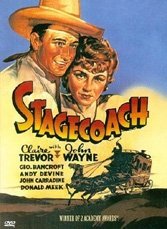 What more could you ask for than a wisecracking John Wayne before the Duke became a victim of his larger-than-life image? When John Ford cast him as “The Ringo Kid” in this edgy Western he was just 32 and a marginal player on the star-system scene. The top-story is Indian arrow-straight. A stagecoach heads West into Geronimo-land and everyone’s on edge.

As the coach’s occupants become more preoccupied, tensions between the riders arise and mature. Ford employs anxiety to disclose character (“Well, there are some things a man just can’t run away from,” says Ringo, née Henry). They include, greed, treachery, cowardice and (in the end) the love of a good woman (Clare Trevor as Dallas). It’s a frontier morality tale that admits for both humanity and prejudice and doesn’t shy from melancholy.