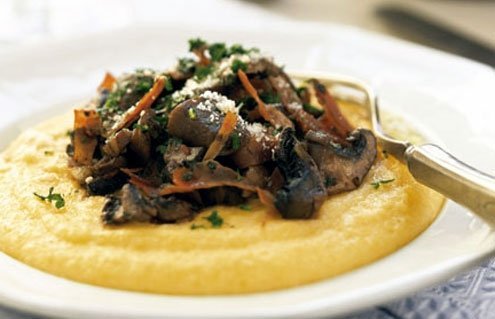 Polenta is tasty with truffles or mushrooms.
T

he history of Assisi is similar to that of many Umbrian and Tuscan hill towns. Early Umbrian settlers made camp on the terraces of Monte Subasio, an Apennine mountain, around 1000 BC. The Etruscans took over (450 BC), only to be overrun first by Romans (295 BC), then the Ostrogoths (545 AD), and finally the Lombards (570 AD). If that wasn’t enough, Guelphs, Ghibellines and popes warred over the territory for most of the Middle Ages.

In a campaign against Guelph-ruled Perugia in 1201, a young enlistee named Giovanni Francesco di Bernardone was taken prisoner. During his captivity, he was overcome by visions that would soon lead him to religious conversion and the preaching of repentance and poverty. Giovanni Francesco would become Francis of Assisi, founder of the Franciscan order and later among the most famous saints in the Catholic pantheon.

A desire to see the city’s architecture led me to Assisi on a crisp early fall day. In all likelihood, the modest saint would have shunned the buildings erected in his name, a contradiction most overlook. He lived most of his life in the wilderness, married to “Lady Poverty,” wearing nothing but a simple coarse robe. But the structures are anything but simple.

The beautiful Basilica of San Francesco is made from delicately pink tinted marble quarried from Monte Subasio, which rises nearby. The basilica has two levels, with an upper and lower chapel, with frescoes by Cimabue, Giotto, Simone Martini, and Pietro Lorenzetti.

In the center of town, near the 14th century church of Santa Maria Sopra Minerva, I found a small artisanal food shop called La Bottega dei Sapori, which is run by a pleasant Umbrian man named Fabrizio Pagliaccia. Hearing me speak English with my friend Melissa, he decided to hold forth on pecorino — albeit in fractured English.

When the conversation turned to Italian, we met a different Fabrizio: the skilled salesman. From behind his deli counter came samplings of cheeses, wild boar prosciutto, Montefalco wine, and various spreads. Most interesting of all was a meat sauce recipe he recommended accompany polenta al tartufo.

Polenta pre-dates pasta. The Romans made it with farro, or wheat grain. These days, corn provides polenta’s base (corn reached Italy from the New World in the 16th and 17th centuries, along with tomatoes and peppers.) Widespread corn crops helped polenta become a northern Italian staple by the 19th century.

But polenta lacks niacin. Its widespread consumption produced a vitamin deficiency disease known as Pellagra (“pelle agra,” or “rough skin”). The disease can cause diarrhea, dermatitis, dementia, and death. A wave of Pellagra outbreaks in the rural American south in the early 20th century finally led to studies and treatment options.

Before tackling Fabrizio’s polenta recipe I decided to attempt a more basic version. On Christmas Eve I made polenta in place of cornbread. There are countless polenta recipes. In general terms, the idea is to slowly cook the cornmeal (with about four times the amount of liquid to meal) until it turns into a thick and creamy mixture.

You heat the liquid until it begins boiling, dim the burner to low, add the polenta slowly, and stir constantly for the first five minutes to avoid clumping. Once the cornmeal is mixed in, you let it simmer for 30-45 minutes, stirring occasionally until all is nice and creamy.

Water is the traditional liquid, with a pinch of salt. Depending on how you’re serving the dish, meat, fish or vegetable broth can provide great additional flavors. To get greater richness, I used half-water and half-milk for my Christmas polenta.

My first effort tasted great, but came with a problem. When I scooped out all the polenta the pot was left with a crispy burnt layer. Much scrubbing followed. There are two possible reasons for the problem:

Either 1., The bottom of the pot is too thin and doesn’t distribute heat well (my problem) or, 2. The heat is too high, burning the polenta rather than slowly simmering it. I was more attentive the second time around, stirring much more frequently. This time, my pot survived the test.

Polenta with a rich meat tomato sauce is a hearty meal alone with little extra needed, other than a large bodied red wine. Melissa and I split a Nebbiolo Langhe Poderi San Rocco 2006 to keep the chilly and rainy Roman winter at bay.