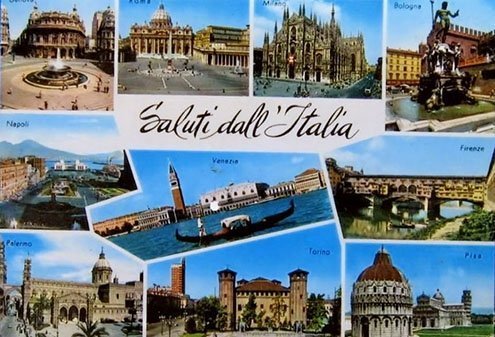 For some, postcard-land isn't quaint.
I

don’t know if you’ve heard, but there is a new documentary series on Rai 1 about Italy’s World Heritage Sites that is an absolutely must see.

I’m not recommending it. I’m just quoting what my husband told me last Sunday afternoon.

Despite having lived my entire adult life in Italy, I’m not in the habit of watching domestic TV. When they switched off the analog signals, all the state-run channels disappeared from our screens like censorship in reverse and we never got around to installing a digital top box.

But in an effort to be amiable, I agreed to stream this runaway hit.

The episode I saw kicked off in Pisa’s Piazza dei Miracoli and wove its way through all the minute details of the Leaning Tower, then the Cathedral next door, then the Baptistery next to it, then the graveyard next to that, then back to the Leaning Tower. Then Andrea Bocelli threw in his two cents, then someone demonstrated the building’s acoustics, then Bocelli came back to tell us about a handful of Haiti’s orphans, then someone spent a good 20 minutes describing every detail on every tombstone in a room full of tombstones and then, just when I thought I had seen it all, Galileo Galilee appeared, lamenting about how he truly wished he’d never discovered the sun was at the center of the universe, since it only served to see him branded a heretic.

After the reincarnated Galileo shared his life story, which included waxing lyrical about the infinite novel that is the universe, I checked the run time so far. We weren’t even halfway through and still had to wait to hear Mel Gibson gush about Matera and a Renaissance noblewoman in the Dolomites complain about her overly busy Renaissance nobleman husband. And all the while, a thrumming 500-piece, Hans Zimmer-worthy orchestra built up to an epic crescendo that served no other purpose than to prevent you from attaining the sweet release of sleep.

It was then and there that I realized I could live my entire life in Italy and never truly understand the locals. No, wait: scratch that.

What the three-hour documentary proved was that I would never truly understand my Italian husband.

In his eyes, the program was an overdue reminder of the incredible national patrimony his compatriots so often overlooked.

In my eyes, it was an unnecessary circle jerk for a nation of people who already considered themselves the best in the world. Italians are the Americans of Europe. I’ve yet to meet one who doesn’t believe they are superior in all ways. U-S-A? No, I-T-A! I-T-A! I-T-A!

After the documentary, I spent the rest of the week picking up on the little Italian husband things that baffle me.

How he never leaves the house without a scarf in winter even if it’s just to get the post. It might be 25C out there, but if the calendar says it’s still winter then the entire town engages in an unconscious battle to see who can wear the thickest, most ostentatiously puffed jacket to the supermarket.

How he can almost plow into a pedestrian without blinking while managing to complete the two-hour journey to Rome without ever using his turn indicator (at the same time clucking over how disgusting it is to see Australians change lanes on the freeway from both the right and the left).

The ways and means of his strict culinary etiquette, which includes not eating gelato as a starter, not mixing cappuccinos and sandwiches, not cooking two different kinds of similar looking pasta in the same pot of boiling water, and never, so help you god, breakfast on pancakes and bacon with maple syrup because that is, and I quote, an affront to all things good and kind in this world.

It’s funny because most of these traits my husband shares with most Italians, along with an almost elemental understanding of which pasta goes with which sauce. In my world, it’s short or long. In his, there are a million options.

I am ethnically Italian, as much an Italian as my husband. All that separates us is our birthplaces, and yet, every day, I am presented with hundreds of little examples that are unintentional reminders of my outsider status.

When people think of expat relationships, they almost always pick up on the language barrier. That a person is fundamentally different if they are expressing themselves in a language that is not their own.

Certainly language plays a role, but after more than a decade together, Giulio and I speak our own garbled mess of Italinglish, a ridiculous language where “squishare” is a fully-fledged and conjugated Italian verb and “bogan” is a perfectly acceptable way to describe an inelegant local.

The barrier we find ourselves standing in front is more powerful than language. One in which the cultural reference points and generational markers of one mean nothing to the other. These include a lifetime of character-defining books, movies, music, celebrities and fads that I never experienced living all those hundreds and thousands of kilometers away in suburban Melbourne.

It’s a funny, slightly demoralizing, terribly isolating quirk in intercultural relationships that can, if you’re extremely unlucky, manifest in a Sunday afternoon spent watching a long-dead scientist lecture you about poor life decisions while an over-eager tenor deafens you and Gibson, since fallen on lean time, loses his head about just how perfect this tiny Italian village was for his epic all-Aramaic Bible blockbuster about Jesus. At least Jesus was not interviewed.