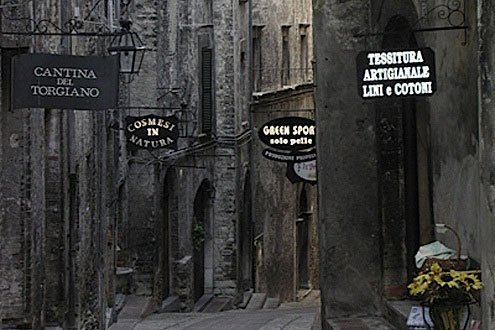 Starting a new life in an abandoned ruin near Todi.
O

ver the years I’ve grown used to the expressions of envy etched on the faces of people I meet when I tell them where I live. Oh Italy, they sigh, as they conjure up images of endlessly blue skies, smiling waiters and long evenings spent over a bottle of red wine. I met a woman on holiday recently and told her I lived in Umbria. Her eyes glazed over as she informed me that I was living every Englishwoman’s dream — the sunshine, the olive oil, the truffles, the views. And turn on just about any English TV station and you’ll be treated to the escapades of the couple uprooting themselves from Braintree or wherever and heading lock stock and barrel to start a new life in an abandoned ruin near Todi.

As anyone knows who has done such a thing, it’s not all sunshine and laughter. And as many a TV show gleefully documents, it can all go horribly wrong. Speaking as someone who did just that, i.e. upped and left for a pile of rubble in the Umbrian countryside, I can say I was extraordinarily lucky. I didn’t have any of the bureaucratic disasters that plague many a foreigner seeking to buy a property in Italy, and I managed to find builders who did their work on time and, miraculously, stuck to the price quote. They even gave me one of their silly hats so I wouldn’t get paint in my hair when I was doing the decorating. That was 20 years ago now, and I’ve just had some more renovation work done. Different builders, but just as good, though sadly no silly hats. They finished two months before schedule, and the bill was less than the estimate.

Building and bureaucracy aside, I’ve been pretty happy living here. So it was with some surprise that I met an Italian woman recently who has moved to Italy from England — and hates it here. In a sense, this woman is the mirror image of myself.

She went to live in London when she was in her twenties, just about the time I was buying my ruin in Umbria and working in Rome. She married an Englishman, around the same time I married my Italian husband. She had a child — well, I had three, but who’s counting? Then, around the same time that I decided Rome was becoming too difficult, she made the same decision about London. We found ourselves converging on Spoleto, which we had both identified as the near perfect place to live.

But while I am relatively content here, my new friend is desperately unhappy. She loathes the people — so unfriendly and inhospitable — and cannot bear the climate, with winters (and here she has a point) that are far longer and colder than in Crouch End. She even hates the food, and stocks up on all her English favorites when she goes back to the place she still calls home. Her husband hates it too, and the daughter keeps pleading with her parents to buy a one-way ticket back to England. Sooner or later, they probably will.

But in the meantime, I find myself in the rather ludicrous situation of trying to defend a country that is not my own. “It’s not always this cold,” I said the other day, lying through my teeth, trying to cheer her up. And: “The earthquakes will probably stop soon,” as she and her daughter shook with fear after the umpteenth tremor had caused the local school to be evacuated. But what she really misses more than the marmite or PG Tips teabags are her friends. “I miss having a natter with my mates,” she says, speaking in her brilliantly colloquial English, with just a slight twinge of accent.

That finds me at a loss for comforting words, for when all’s said and done, I know exactly how she feels. Perhaps my biggest gripe about living where I do is that decent female companionship is hard to come by. It’s probably my own fault but, with a very few notable and treasured exceptions, I don’t have many close female friends here, and I miss being able to “have a natter” about a book, or a film, or anything other than children’s diets and bodily functions, or worse, Stepford Wife-style hot tips for cleaning your home. My lowest ebb came a few years ago, when, seeing that I was recently married, my husband’s female cousin decided to impart some useful advice — “When you are cleaning the lavatory bowl, it’s a good idea to squirt the nozzle up and under the rim,” she said helpfully, as she demonstrated the technique with a flourish.