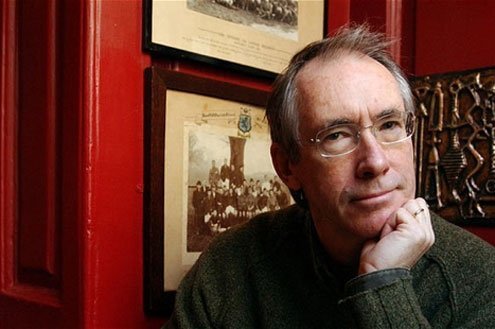 Sweet Tooth, says Ian McEwan, represented "...a way in which I can write a disguised autobiography."
I

an McEwan’s latest novel, “Sweet Tooth” (Jonathan Cape, 2012) runs to the finish as a deftly torqued narrative. Unhappily, the novel starts as a fluffy tale of bumbling spies and liars and stays that way until McEwan gears into his trademark psychological chiller.

Remembering back to Cold War 1972, fictional narrator Serena Brume starts a four-decades-on memoir of that year, when she was 22 and beginning a new computer-related job at Britain’s health and home services. She also had an odd, part-time task — with MI5. With an undercover operation code named “Sweet Tooth.”

If this sounds like a lot of treacle, it is. Certainly Serena’s impermeable innocence offers a tempting foil to McEwan’s usual darker designs. To render her more plausible — or interesting? — McEwan makes the mistake of donating his first chapters to her dull and drawn-out back-story:

“How and when,” she asks, ” did this Anglican Bishop’s daughter slip from her idyllic… walled garden childhood, into a world of illusion and fluid reality?” She can’t really explain it.

The reader, too, has wondered why a Cambridge Third in Maths girl, addicted to light romance novels, is tapped by Home Services. Let alone by MI5. (Which McEwan playfully refers to as M15). How did this happen? Well…

At Cambridge, fellow student and lover Jeremy introduced her to his don, Tony Canning, who becomes her next lover. Canning adores her sweetness — sweet tooth again? — but worries that she’s intellectually not quite there. He insists she read newspapers, a formidable and formerly unthinkable chore for Serena. Yet despite her self-bettering efforts, Tony inexplicably dumps her, literally… from his car onto a roadside layby (though she keeps her MI5 job).

This explains how, if not why Serena got her post, and introduces a much needed plot-driving question: what connection did Cambridge don Canning have with MI5? (Ex-don, to be precise, since he’s recently died – under mysterious circumstances, of course.)

But Serena on her way. And though we are now a full third into the novel, we finally meet McEwan’s strongest character: Tom Haley.

Serena’s secret is that MI5 is providing the cash. As inevitably as in any light espionage fiction, she and Haley later become lovers. Too late to confess her double life, isn’t it?

In recent interview McEwan said “Sweet Tooth” represented “…a way in which I can write a disguised autobiography.” Haley as an alter ego? Certainly more plausible — and engaging — than Serena, who also belongs to McEwan’s generation.

Fact is, when Haley at last arrives center stage, McEwan’s own interest in “Sweet” sharpens notably. As he focuses on Haley, character and writer, we finally move into the novel’s dramatic, devious, and unsettling core, in which the writer’s shift between reality and illusion much resembles McEwan’s own career themes. Poor Serena never quite grasped this quality in Haley’s work.

Told by MI5 to vet his fiction, she dutifully studies Tom’s stories. But misses the fact that Haley, too, is a spy. On life. He snatches details from swiftly glimpsed daily episodes, and re-invents them as tales of psychological hallucination.

Serena reads Haley’s story about a man who buys a store mannequin to be his lover, only to smash the acrylic figure in a fit of psychotic jealousy. She’s so puzzled by the work that she decides it’s best not mention it to her spy bosses.

Ensuing pages outline the ingenious madness of Haley’s works. And these are a reader delight. So good, in fact, that McEwan is able to pull off an unexpectedly powerful ending. As Haley the spying writer begins to spy on his espionage lover.

Few writers are as nuanced as McEwan in evoking those mysterious shapes dissolving in a hall of mirrors. Too bad he waited so long to begin what he does best.