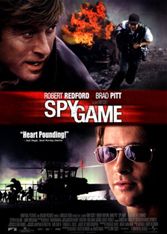 Watching Robert Redford’s twilight has never been more engaging than here, where he hams up jaded but astute CIA agent Nathan Muir. Hours from retirement (it’s 1991), he learns that ace pupil Tom Bishop (Brad Pitt) has misbehaved in China and is in trouble with The Company. Muir, a rogue and a dandy, swings into action. The movie waltzes pleasantly between the China crisis and the early days of the friendship between Muir and Bishop, including nice set pieces in East Berlin and Beirut. Redford is a veteran gift to sardonic humor, which director Tony Scott knows. Pitt, in turn, personifies the Muir of olden days. Redford romps happily through the park, flashing his Sundance smile. This is a good example of a minor (occasionally maudlin) film hijacked by a major star who refuses to act his age.