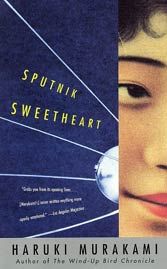 It doesn’t matter a whole lot that the plot to “Sputnik Sweetheart” — a tale about a young Japanese woman who falls for an older woman and then goes missing while the two vacation on a Greek island — fails to hold together. What Murakami is doing here is contemplating how people get separated from parts of themselves and often live out whole lives as only partial beings.

The recurrent image in this novel, stunningly evoked in a flashback scene where the older woman gets trapped in a ferris wheel, is the solitude of the sputnik, the first satellite to orbit the earth.

Murakami, however, is at his best when he stays within Japan and within the realm of his exurberant male sexuality: the European scenes in the novel feel like they were gleaned from second-rate travel lit and the lesbian encounters the stuff of boyish fantasies. Still, like few other authors, Murakami is able to weave the humdrum with the bizarre into strikingly original meditations on the mystery of our interior lives.