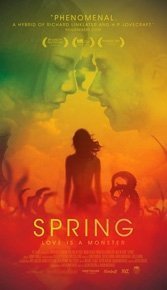 After mild mannered Evan’s mother dies and he gets into a workplace tussle, a friend suggests that maybe he “change up his environment.” That he does, heading to Rome and southward still. Ah, the Adriatic coast (Polignano a Mare, near Bari), home to pretty landscapes, geckos, worms, spiders and scorpions. Evan (Lou Taylor Pucci), a California sous chef, improbably lands an off-the-books job as a farm worker and even more improbably meets Louisa (German actress Nadia Hilker), a student of evolutionary genetics who’s hotter than July and somehow finds herself in town doing research. She “talks” American (but also speaks Greek and Sumerian) and behaves midway between a hooker and a vamp, with the latter becoming rather important as this little non-charmer lurches toward even doses of romance and horror.

Directors Justin Benson and Aaron Moorhead glaze their Italian landscapes to slowly push from the idyllic into the macabre, but the problem here isn’t the pictures but the words. Can just being “European” make you into a vampire? Who knows, but it’s an idea. So is being 2,000-year-old and immortal. Ethan takes his romantic adventure good (ironic) stride, occasionally telling his necrotic girlfriend she could use a shot of animal cells to fill up that gaping hole in her face.

Maybe Benson and Moorhead are onto something, their own genre: the vampire, rabbit sacrifice, and embryonic cell-stealing seaside Italian tourism movie. What do vampires, once discovered, say by way of explanation: “I didn’t want to hurt you…” Tell that to the rabbits.