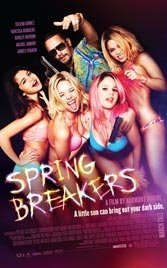 With a troupe of Disney characters starring, Harmony Korine’s “Spring Breakers” looks like another superficial teen comedy. In fact, it’s far more than that.

Four small-college girls (Vanessa Hudgens, Selina Gomez, Ashley Benson and Rachel Korine, the director’s wife) plan the perfect spring break, deciding they’ll do anything to shake off the shackles of everyday life. The spring break, in all its titular wonder, permits American students to close their textbooks and go wild for a fortnight. It’s a frenzy of white sand, beer kegs and narcotics, all sprinkled with bright-eyed hopes of “finding yourself.”

To kick off their run of self-exploration, the hormonal girls rob a chicken store. Hidden under their vibrant headwear, they steal enough to take them to Florida and, needless to say, they’re tickled pink. From the robbery, they dive into a wonderland of depravity that pushes their lungs, livers and nostrils to the limits. They feel free, but nothing smashes that illusion like a visit from the police.

After a house party’s raided, they’re thrown into jail. With no money to pay their bail, drug-dealing hoodlum “Alien” (James Franco) offers to help out. He drafts them into gangland life and starts to build a strange relationship with the group. Alien’s gold-studded smile and limitless offer of riches grow into more forbidden fruit for the girls to reach for.

The cast does an amicable job, but the real star performer here is the director, Harmony Korine (he wrote the popular 1995 “Kids”). The plot simmers slowly enough to get into our heads and lead us through a delirium of sun, sex and sadism.

It’s a stylish and vervy satire of perverse U.S. youth, with vivid colors animating the story’s clever free-flow. Though it can feel at times like a lurid dream — and could have done with some editing — it’s mostly a joy, an estrogen-pumped black comedy that has the makings of a cult film for the ages.