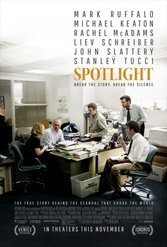 Rigorously unsentimental, superbly dramatic but without excess trimmings, director Tom McCarthy’s account of the Boston Globe’s 2001 uncovering of the sexual abuse scandal that would ultimately cost Catholic Cardinal Bernard Law his job and sully the reputation of Catholicism worldwide is in the best American tradition of films about journalism, including both large productions about political upheaval, “All the President’s Men,” and smaller ones, “Broken Glass,” about inner breakdowns. It is, in essence, examines a large institution — in this case a large urban newspaper, the challenger — willing to take on an even larger one, the Roman Catholic Church, leveling the playing field by stumbling on the champion’s more unsavory side. Sports metaphors aside, there’s no minimizing the underlying squalor of the subject, sexual abuse.

Michael Keaton is Walter “Robby” Robinson, who heads “Spotlight,” a four-person investigative unit of the kind that flourished until the internet unhinged most major big city dailies. In 2001, Marty Baron (Live Schreiber), the Globe’s laconic, intense new editor (a Jew), picks up on a column suggesting that respected, longtime Cardinal Law (Len Cariou) might have known about the actions of a priest convicted for sexual abuse. He asks the four-member Spotlight team to dig for more, slowly but surely opening a can of worms in highly Catholic Boston. After months of sleuthing, the team uncovers a systematic pattern of cover-ups and legally settled abuse cases dating back decades and including dozens of clergymen.

Since the Boston case made global headlines, there’s no narrative suspense, per se. What matters here is writing, pace, and the dramatic twisting of the tourniquet. McCarthy knows to manage all three, moving seamlessly between his newspaper people, lawyers (both decent and unscrupulous), and finally the churchmen themselves. None of his players misses a beat. Start to finish, the action is that of a taut, top-notch thriller. Schriber’s Baron is an editor who rightly knows no expose will stick unless an institution’s leadership is implicated. He’s understated, credible, focused. Keaton’s Robby, who moves from skepticism to doggedness, is pitch-perfect, as are Mark Ruffalo as passionate lead reporter Michael Rezendes and Stanley Tucci as intense but even-tempered victim lawyer Mitchell Garabedian (“If it takes a village to raise a child, it takes a village to abuse one.”) This is not about a witch-hunt but about the ghouls in frocks and their protective “general,” Cardinal Law, who manipulated the system to keep the squalor under wraps. The discovery is joyless. Nor is the Globe absolved from decades of turning the other cheek. “When a priest pays attention to you,” says a victim, “it’s a big deal.” So is when the Church decides to protect its sinners. This is an important, stirring and disciplined piece of filmmaking that memorably portrays an institution, the big city urban daily, in far deeper decline than the Catholic Church.